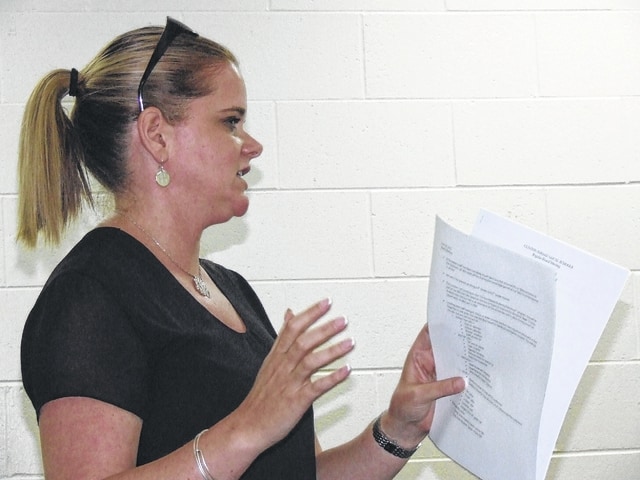 Clinton-Massie Elementary School Principal Katie Klei reports to the school board that new elementary staff manuals are being created.

ADAMS TOWNSHIP — Though the timing remains unsettled, the amount of an anticipated Clinton-Massie earnings tax levy may be firming up at 0.25 percent.

At this week’s school board meeting, President Jeremy Lamb said he thinks the amount of a proposed 0.25 percent earned income tax levy is right.

He said he thinks a tax issue needs to provide stability over five years “so you can pay employees what you need to, deliver the services, make your capital improvements that are needed, et cetera.”

At another point in the meeting, Lamb referred to generating the revenue needed “to smooth out [the school district’s] five-year [financial] forecast.”

On the question of when to have the tax levy appear on the ballot, he said he thinks the district could be “pushing it” if it aims for the upcoming November 2015 ballot.

To assemble a campaign committee comprised of residents well-versed on a tax issue will take time, said Lamb.

Board member Mike McCarty said, “It can’t be a board-run levy again.”

McCarty said election result trends show that tax issues in spring elections are “a little more successful” than those posed in the fall.

A downside to a spring 2016 tax question, said board member Chris Harrison, is that it would be held in March, “restricting” the door-to-door canvassing that the levy committee could do due to winter weather.

Superintendent David F. Baits, Ph.D., brought up that if the levy is on a 2016 ballot, the school district won’t start collecting revenue until January 2017, and won’t get the full effect of the tax until several months into 2018.

The topic of timing will be revisited at the July board meeting. In the meantime, district officials will attempt to gauge the level of interest among district residents to run a levy campaign.

In other news from the board of education meeting:

• There will be two new class fees in the district for the 2015-16 school year: science in grades four through eight, and sixth-grade social studies.

• There will be an after-school computer programming and design club by Mary Ritter and Laura D’Arcy.

• The board approved renaming the middle school gymnasium to the Andy Copeland Middle School Gymnasium.