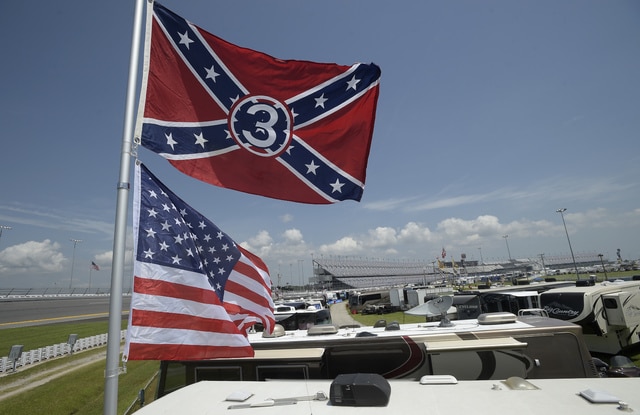 Confederate flags fly on top of a motor home at Daytona International Speedway, Saturday, July 4, 2015, in Daytona Beach, Fla. NASCAR and the speedway offered to replace any flag a race brings to the track with an American flag. (AP Photo/Phelan M. Ebenhack)

Confederate and American flags fly on top of motor homes at Daytona International Speedway, Saturday, July 4, 2015, in Daytona Beach, Fla. NASCAR and the speedway offered to replace any flag a race brings to the track with an American flag. (AP Photo/Phelan M. Ebenhack)

Confederate and American flags fly on top of a motor home at Daytona International Speedway, Saturday, July 4, 2015, in Daytona Beach, Fla. NASCAR and the speedway offered to replace any flag a race brings to the track with an American flag. (AP Photo/Phelan M. Ebenhack)

It’s been like that for years. And the 57-year-old Rebenstorf has no plans to take it down — not even if NASCAR decides to ban the embattled flag from its racetracks.

“They’d have to come and get it,” Rebenstorf said Saturday, pointing out that his American flag purposely flies a few inches higher than the rest.

Rebenstorf and others staunchly defended their Confederate flags at NASCAR’s first race in the South since the racing series and its tracks urged fans to no longer wave the banner. Dozens were scattered throughout the vast infield all weekend leading to Sunday’s race.

“It kills me that NASCAR is jumping on the bandwagon,” said 55-year-old Paul Stevens of nearby Port Orange. “They should just let it pass, let everything die down. But NASCAR is too quick to try to be politically correct like everybody else.”

NASCAR took a stance on the Confederate flag after last month’s South Carolina church massacre. It backed Gov. Nikki Haley’s call to remove it from the Statehouse grounds and noted it doesn’t allow the flag on anything it sanctions. The series stopped short of banning fans from displaying the flag at its events, but Daytona and 29 other tracks asked fans to refrain from flying them.

Not everyone obliged. Daytona also offered to exchange Confederate flags for American flags this weekend, and track officials said a few made the swap Sunday morning.

“I think the voluntary exchange program for us right now was appropriate with the limited window that we had coming into this event weekend,” track president Joie Chitwood said. “And more importantly, I think it’s important to trust our fans, asking our fans to display a flag that we should all be proud of. Everybody should be proud of the American flag.”

Indeed, the American flag is prominently displayed all around Daytona — no surprise given the Fourth of July holiday and the patriotism that NASCAR routinely promotes.

But spotting a Confederate flag is easier than finding a souvenir shop, restroom or beer stand.

The first motorhome located inside the Turn 4 tunnel has one flying high above it, and it doesn’t take long to reach double figures when counting them on a stroll through the infield. They’re on clothing, coolers and cars, and even tattooed on skin.

Larry Reeves of Jacksonville Beach has a tattered Confederate flag on top of his motorhome. He initially thought NASCAR was banning the banner and didn’t display it this week. But once he saw some flying around him and asked a few questions, he realized it was voluntary and quickly sent his back up the pole.

“It’s just a Southern pride thing,” the 66-year-old Reeves said. “It’s nothing racist or anything. I’ve been doing this for 30 years. My family is from Alabama and we’ve been going to Talladega forever. It isn’t a Confederate thing so much as it is a NASCAR thing. That’s why I fly it.”

Like others at Daytona, Reeves believes the flag flap is much ado about nothing.

Rebenstorf plans to leave his up no matter what NASCAR mandates.

The St. Petersburg resident spent six years in the Navy, served in the color guard and has strong feelings about vexillology, the scientific study of the history, symbolism and usage of flags.

The Civil War-era flag has been under attack since nine black men and women were gunned down at a historic church in Charleston on June 17.

The suspect, 21-year-old Dylann Roof, had posed with a Confederate flag in photos posted on a website that displayed a racist manifesto attributed to him.

NASCAR, which has roots in the deep South, moved quickly to distance itself from the flag despite some backlash from fans. The sanctioning body could have done — and eventually might do — more.

“I think what happens in this situation is you have people on both sides who feel very strongly about something and they’re very passionate about it,” Chitwood said. “You can’t argue with someone’s passion or their opinion. That creates something that ends up on the front page of the newspaper or is the headline in the news. If we’re going to enter that discussion, you’ve got to be thoughtful and we’ve got to really think through it and be fair to both sides and make sure that whatever we come up can work.

“In something like this, the more thoughtful we can be, understanding and really taking the time to really vet through, I think that’s going to be the important thing moving forward.”