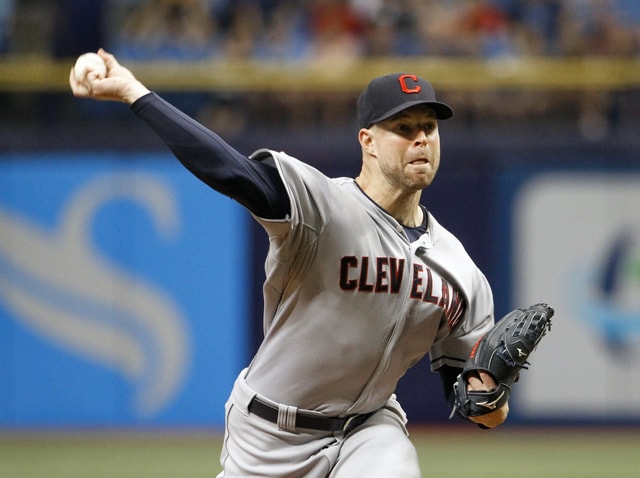 Dark clouds hang over Kauffman Stadium as as severe thunderstorm passes though before a baseball game between the Kansas City Royals and the Tampa Bay Rays Monday, July 6, 2015, in Kansas City, Mo. The game was postponed and will be replayed Tuesday as the first game of a doubleheader. (AP Photo/Charlie Riedel)

Corey Kluber takes on Houston in his final start for Cleveland leading up to the All-Star Game. He’s 3-9 with a 3.64 ERA and among the major league leaders in strikeouts. Last year, he was 9-6 with a 3.01 ERA at the break and went on to win the AL Cy Young Award.

The Rays and Royals are set for a day-night doubleheader at Kauffman Stadium, a day after their game was postponed as tornado sirens blared across the Kansas City metro area. Matt Moore will pitch the opener for Tampa Bay in his second start since returning from Tommy John surgery.

Athletics ace Sonny Gray starts at Yankee Stadium. It’ll be his first appearance since June 25, shortly before he was hospitalized for salmonella.

Rangers right-hander Yovani Gallardo takes a scoreless string of 29 1/3 innings into his start against the visiting Diamondbacks. He has the longest shutout streak in the majors this year.