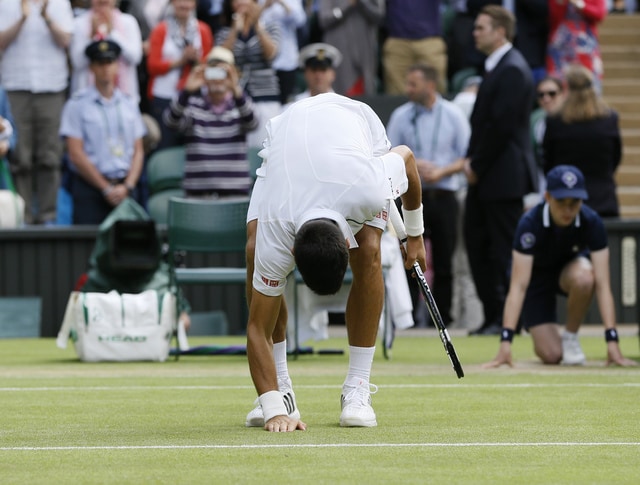 Roger Federer of Switzerland serves to Gilles Simon of France during their singles match at the All England Lawn Tennis Championships in Wimbledon, London, Wednesday July 8, 2015. (AP Photo/Pavel Golovkin)

Novak Djokovic of Serbia touches the ground after winning against the Marin Cilic of Croatia after winning the men’s quarterfinal singles match at the All England Lawn Tennis Championships in Wimbledon, London, Wednesday July 8, 2015. Djokovic won 6-4, 6-4, 6-4. (AP Photo/Kirsty Wigglesworth)

LONDON (AP) — Three of the four participants in the men’s semifinals Friday at Wimbledon — Roger Federer, Novak Djokovic and Andy Murray — already have their names etched on the trophy.

The other, Richard Gasquet, does not.

Three of the four semifinals already own multiple Grand Slam titles: Federer with a record total of 17, Djokovic with eight, Murray with two.

Gasquet has yet to participate in a major final.

And three of the four were at the top of the seedings when the tournament began: Djokovic at No. 1, Federer at No. 2, Murray at No. 3.

“I am the worst,” Gasquet declared, ticking off the names of the rest of the men remaining at the All England Club.

Sure, your opponent Friday, defending champion Djokovic, is seeking a third Wimbledon title. And, yes, the other semifinal features one player seeking his record eighth championship at the grass-court tournament (Federer) against another in pursuit of his second (Murray).

But there were 124 entrants, all gone by now, who would love to trade places.

“I’m happy to be here. It’s great to be here. I am a tennis fan. To find yourself with these kind of players, it’s magnificent,” Gasquet said. “It’s super to find myself in the final four in Wimbledon.”

This isn’t his first go-round, either. Gasquet also made it this far twice before at majors, including at the All England Club in 2007, at age 21, when he lost to eventual champion Federer.

“It’s been a long time; it’s been too long,” Gasquet said. “I don’t know what to think. It’s another life.”

And yet when he was asked whether this is a “new” version of Gasquet, he said he hears that sort of question “every time I win a match.”

“I deserve to be in the semifinals. … I’m not coming from nowhere,” he said.

Here’s a look at the men’s semifinals Friday at Wimbledon:

This is the matchup that will get most of the attention, for several reasons.

Federer, the runner-up to Djokovic at Wimbledon a year ago, has not won a Grand Slam title since beating Murray at the All England Club in the 2012 final. A few weeks later, Murray defeated Federer at Centre Court to win the gold medal at the London Olympics.

Murray credited those two matches with helping him take a step up in his career; later in 2012, he won his first major championship at the U.S. Open, and in 2013, he became the first British man in 77 years to win Wimbledon.

Federer holds a 12-11 edge over Murray, taking the past three matchups. Even Djokovic isn’t sure who should be expected to win.

At this year’s French Open, Djokovic eliminated Gasquet in straight sets. Later at Roland Garros, of course, Djokovic’s pursuit of a career Grand Slam was stymied in the final by Stan Wawrinka, the man Gasquet edged 11-9 in the fifth set in Wednesday’s quarterfinals.

As for whether Gasquet could pull off another surprise by getting past Djokovic, here was Wawrinka’s assessment: “I don’t give him much of a chance.”