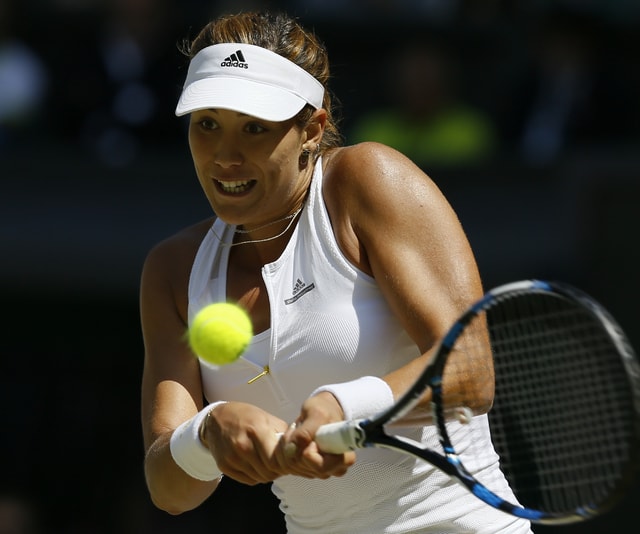 LONDON — Turn back the calendar more than a year, to June 28, 2014, when Serena Williams lost to Alize Cornet in the third round at Wimbledon.

It was Williams’ earliest exit from the All England Club in nearly a decade. It also marked the fourth time in five Grand Slam tournaments she was beaten before the quarterfinals.

Now examine what Cornet, who was seeded 25th and only once previously had been as far as the fourth round at a major, said afterward: “It might be a bit premature to talk about her decline, but when she plays someone who finds the right tactics, she looks a bit lost on the court. In my opinion, there are more and more players understanding how to play her.”

Oh, really? Where are they hiding? Since that day, Williams has not lost a Grand Slam match, winning 27 in a row — on the hard courts of the U.S. Open and Australian Open, then the red clay of the French Open, and now the grass of Wimbledon — heading into Saturday’s final against 21-year-old Garbine Muguruza of Spain.

It will be the No. 1-seeded Williams’ 25th career Grand Slam title match — she is 20-4 in the others — and the 20th-seeded Muguruza’s first.

At the Grand Slam tournament that immediately preceded Wimbledon in 2014, the French Open, Williams lost even sooner, 6-2, 6-2 in the second round, her most lopsided defeat in 318 career matches at majors. The opponent that day just so happened to be Muguruza, a big hitter who talks about the importance of putting on a “poker face” during matches.

“It was an eye-opening loss for me. Some losses you’re angry about, and some losses you learn from. That loss, I think I learned the most from in a long time,” Williams said. “I got so much better after that loss. I was able to improve a lot. I worked on things. I didn’t see the results straightaway. But months later, I started seeing the results, more and more.”

On Thursday, after Williams easily eliminated 2004 champion Maria Sharapova in the semifinals 6-2, 6-4, the 33-year-old American was asked what she remembers about — and might have learned from — that setback against Cornet at the All England Club.

Williams’ reply: “Um, you know, not much. I just realized that I just needed to run faster, I guess.”

She paused, then smiled broadly and added: “I don’t want to talk about that.”

Another topic five-time Wimbledon champion Williams has been reluctant to discuss is all that is at stake for her at the conclusion of this fortnight.

If she beats Muguruza, Williams will have won her fourth consecutive Grand Slam title over two seasons, completing a self-styled Serena Slam, something she also did in 2002-03. That would also put Williams three-quarters of the way to a true Grand Slam — all four championships in a single year — which was last accomplished by Steffi Graf in 1988.

When a reporter made a passing reference to such milestones after a fourth-round victory over older sister Venus on Monday, Williams rested her chin on her left hand and declared: “I no longer answer questions about Grand Slams.”

“She has the perfect game for grass. She serves well, she hits quite flat, takes the ball early, is aggressive,” he said. “It’s her first Grand Slam final, so we’ll see how, emotionally, she deals with it.”

Muguruza is aware that, even if she knows she can beat Williams because she has, Saturday’s task will be tough.

“Everything always depends on her — it’s Serena,” said Muguruza, who has defeated top-10 players Caroline Wozniacki and Angelique Kerber, along with 2015 French Open semifinalist Timea Bacsinszky and 2012 Wimbledon runner-up Agnieszka Radwanska on her road to the final. “It’s a match I need to go into with a cool head.”