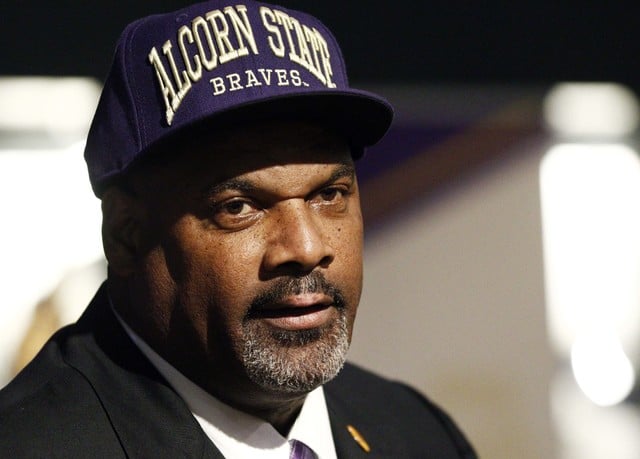 Alcorn State is the king of the Southwestern Athletic Conference after back-to-back league titles.

Now the Braves must try for the three-peat with a new coach and a revamped roster.

Fred McNair is in charge at Alcorn State after taking over for Jay Hopson, who left to become the head coach at Southern Mississippi. McNair, who was promoted after four seasons as Alcorn State’s quarterbacks coach and assistant head coach, is the brother of arguably the school’s most famous alumni — quarterback Steve McNair.

The Braves have 11 starters returning from last season, including dual-threat quarterback Lenorris Footman, who threw for 1,106 yards and 14 touchdowns last season after taking over for the injured John Gibbs Jr. He was also second on the team with 1,023 yards rushing and 11 touchdowns.

“The good thing is he’s won a lot of games and has a SWAC championship under his belt,” Fred McNair said. “Now he just needs to be a little more consistent with his passing.”

Alcorn State’s defense will be anchored by defensive lineman Stacey Garner, a first-team All-SWAC selection who had 16½ tackles for a loss in 2015.

East: Alcorn State still looks like the team to beat, even with a new coach. Footman gained valuable experience last season and there’s enough continuity in the coaching staff to make for a smooth transition. Alabama State and Jackson State should be the main challengers.

West: Grambling and Prairie View A&M were the class of the West last season, with Grambling winning the division by a game. Look for another two-team race again, though Southern could be ready to rise thanks to an experienced offense.

Lenard Tillery, RB, Southern: He was named the SWAC’s preseason offensive player of the year after running for 1,211 yards and 14 touchdowns last season.

Tony Hughes, Jackson State: Hughes, who was an assistant at Mississippi State before taking the Jackson State job, inherits a team that finished with a 3-8 record in 2015. There is some talent on the roster, including defensive star Javancy Jones and quarterback LaMontiez Ivy.

Michael Haywood, Texas Southern: The Tigers are trying to rebuild with first-year coach Haywood after a 3-7 record in 2015. Haywood most recently coached at Miami of Ohio, where he quickly turned around the program and won 10 games in 2010. He was then hired to coach at Pittsburgh, but was fired less than three weeks later after he was arrested and charged with domestic battery with a child present. The charges were ultimately dropped.

Alcorn State still looks like the class of the Western Division. The East looks much more competitive with Grambling, Prairie View and Southern all returning experienced players. Look for Prairie View to make the push to the top thanks to 16 returning starters.