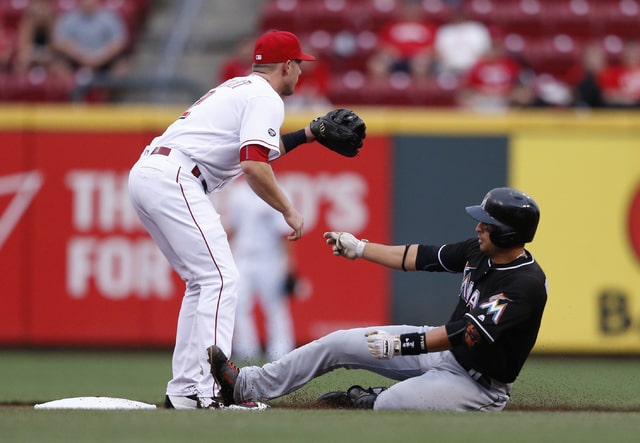 CINCINNATI (AP) — Cutting down on batting practice is working for Tucker Barnhart.

Barnhart’s first career grand slam capped the Cincinnati Reds’ five-run first inning, giving Anthony DeSclafani all the support he needed to beat his former team in a 6-3 win over the Miami Marlins on Tuesday night.

“I haven’t been hitting in the cage as much as I did early in the season,” Barnhart said. “I just take batting practice and get loose.”

Scott Schebler had three hits and Joey Votto a sacrifice fly as the Reds beat the Miami for the first time in five tries this season.

With Miami leading 1-0, the Reds loaded the bases with three straight two-out singles in the first against Jose Urena (1-4), who was recalled from Triple-A New Orleans earlier Tuesday.

“That first inning was tough,” Urena said. “I was trying to keep the ball down, but I couldn’t find it. I was hanging too many breaking balls.”

“We get our run and get off on a good foot with the two quick outs, but then they score five,” Miami manager Don Mattingly said.

Coming off his first loss this season, DeSclafani (7-1) appeared to injure his left ankle making a sudden stop while running the bases in the fourth. He allowed two runs and seven hits in six innings with no walks and six strikeouts.

“I rolled my ankle a little bit,” he said. “It’s swollen and sore right now, but I’ve rolled it in games before and knew if moved around and kept it loose, I would be OK.”

DeSclafani made his major league debut with Miami in 2014 before being traded to the Reds for pitcher Mat Latos.

Miami’s Christian Yelich hit a solo homer in the eighth off Raisel Iglesias, the first extra-base hit allowed by Iglesias in 23 2/3 innings.

Tony Cingrani worked around Ichiro Suzuki’s leadoff triple and a walk in the ninth to get his 14th save in 19 chances.

WE’RE NO. 1: DeSclafani’s balk with Dee Gordon on third base in the third inning was the major league-leading ninth balk committed by the Reds this season.

FINALLY: Ichiro Suzuki’s ninth-inning leadoff triple was his first hit in 11 at-bats at Great American Ball Park, giving him at least one hit in every existing major league stadium.

Marlins: An MRI on Monday ruled out any Achilles tendon problems for infielder Justin Bour, according to manager Don Mattingly. Bour hasn’t played since July 3 because of a right high ankle sprain.

RHP Andrew Cashner (4-9) starts for the Marlins on Wednesday in the third game of the four-game series. He is 0-2 in his last six appearances, one in relief. Reds RHP Homer Bailey (2-1) is scheduled to make his fourth start since coming off the DL, his first in Cincinnati since Aug. 7, 2014.