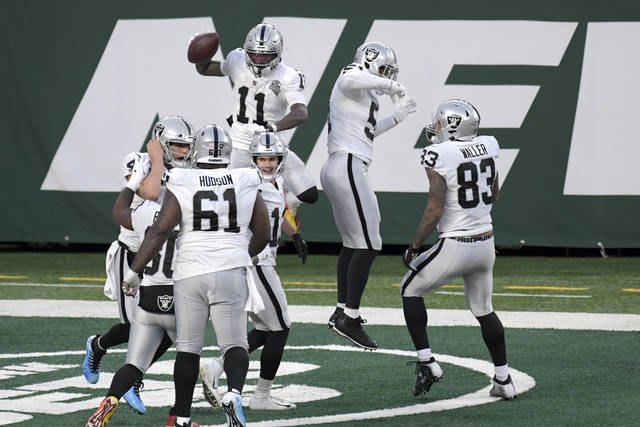 The Jets took a 28-24 lead with 5:34 remaining on Ty Johnson’s 1-yard touchdown and the defense came up with a big fourth-down stop that appeared to end New York’s agonizing wait for its first win of the season.

But New York went three-and-out with a chance to seal it, and Carr and the Raiders had 35 seconds left for what appeared an unlikely comeback. Four plays later, Carr found Ruggs streaking downfield — beating rookie cornerback Lamar Jackson — and delivered the ball perfectly for the winning score.

The Raiders (7-5) celebrated wildly, and the deflated Jets (0-12) could only imagine what could — and maybe should — have been.

After a squib kick by Las Vegas, the Jets had one final chance but Sam Darnold’s Hail Mary throw was batted down in front of the end zone.

The lowly Jets lost their 12th straight and tied the team mark for longest overall skid, which spanned the 1995 and ’96 seasons under Rich Kotite. New York remains on pace to join the 2008 Detroit Lions and 2017 Cleveland Browns as the only NFL teams to go 0-16.

Baker Mayfield threw for a season-high 334 yards with all four of his touchdown passes in the first half, and the Browns scored the first 17 points before holding on to win their fourth straight.

With both chasing AFC playoff berths, the Browns looked like the team leading a division — they are second in the AFC North behind the unbeaten Pittsburgh Steelers — as they improved to 9-3 for the third time in their expansion era.

The Titans (8-4) came in leading the AFC South and left tied after the Colts beat Houston 26-20, though Tennessee still has the better division record. The Titans fell apart after a bad fourth-down spot on their opening drive. NFL rushing leader Derrick Henry lost his first fumble this season on the next drive.

Mayfield kept the Browns from needing the NFL’s top rushing offense in what had been expected to be a run-game showdown against the Titans and Henry. The Browns had their best-scoring half ever, leading 38-7 at halftime, topping the 35 points scored in the second half at Cincinnati in 2004.

KANSAS CITY, Mo. (AP) — Patrick Mahomes threw for 318 yards and a touchdown, Harrison Butker was perfect on five field goals, and Kansas City overcame some red-zone woes and big mistakes that cost them two more scores to hold off Denver.

Travis Kelce had eight receptions for 136 yards and the go-ahead TD grab late in the third quarter, and Tyrann Mathieu twice picked off Broncos quarterback Drew Lock — the second with 24 seconds left to seal the win — as the Chiefs clinched a playoff berth by improving to 11-1 for the second time in franchise history.

Lock finished with 151 yards passing and two touchdown throws to Tim Patrick, while Melvin Gordon ran for 131 yards on just 15 carries for the Broncos (4-8) .

HOUSTON (AP) — Philip Rivers threw two touchdown passes in the first half and the Indianapolis defense dominated in the second half.

The Texans had a chance to take the lead with about 90 seconds left. They were at the Colts 2 when Deshaun Watson fumbled a low snap and Anthony Walker pounced on it to seal Indy’s win.

The Colts (8-4) led 24-20 at the break after Rivers threw TD passes of 21 and 39 yards. Their offense didn’t score after that, but the defense held Houston (4-8) scoreless in the second half and Justin Houston added a safety.

The safety was Indy’s third this season and the fourth of Houston’s career, tying him for the most in NFL history. Houston also had three sacks, three QB hits and forced a fumble.

Watson threw for 341 yards and ran for a score in the first half. But he did not have a touchdown pass for the first time this season and threw an interception after not being picked off in the last six games.

MIAMI GARDENS, Fla. (AP) — Tua Tagovailoa returned from a thumb injury that forced him to miss one game, throwing for a season-high 296 yards and a score in a game that included five ejections and a benches-clearing confrontation.

The Dolphins lost their best defender when NFL interception leader Xavien Howard was thrown out late in the first half. But they limited Cincinnati to 25 yards after halftime and finished with six sacks. Miami ranks second in the NFL in scoring defense and has allowed 10 points in the past two weeks.

Both benches emptied in fourth quarter after Cincinnati’s Mike Thomas was flagged for a foul covering a punt. There was pushing and shoving, and Bengals safety Shawn Williams and Miami receivers DeVante Parker and Mack Hollins were ejected.

Tyler Boyd turned a short pass into a 72-yard touchdown to give the Bengals a 7-0 lead, but he was later ejected following a tussle with Howard.

The Dolphins (8-4) won for the seventh time in eight games to achieve their best 12-game record since 2003. The Bengals (2-9-1) lost their fourth game in a row and are assured of at least nine defeats for the fifth consecutive year.

Tagovailoa improved to 4-1 as a rookie starter with seven touchdown passes and still no interceptions. He played with the thumb on his throwing hand taped, and warmed up as the game wore on. He threw for 167 yards in the pivotal third quarter, when the Dolphins rallied from a 7-6 halftime deficit to mount three scoring drives.

MINNEAPOLIS (AP) — Dan Bailey kicked a 23-yard field goal with 1:49 left in overtime for Minnesota after he missed two extra points and a 51-yard try with 13 seconds remaining in regulation.

Harrison Smith set up Bailey’s redo with a diving interception at the Jacksonville 46, the fourth turnover of the game by the Jaguars. Jacksonville stayed one game ahead of the winless Jets in the overall standings, trailing New York for the top pick in the next draft.

The Vikings (6-6) kept the playoffs well within reach with their fifth win in six games after their bye despite a steady stream of gaffes.

Justin Jefferson topped the 1,000-yard mark for Minnesota just 12 games into his rookie season, finishing with nine receptions for 121 yards. Adam Thielen had eight catches for 75 yards and a score in his return from a one-game COVID-19 quarantine.

The Jaguars, who’ve had four of their last five outcomes decided by four points or less, had the edge in the unenforced error department. Mike Glennon was picked off twice and lost a fumble in the second half, as did Chris Conley, and the Jaguars had 10 penalties for 83 yards.

ATLANTA (AP) — The Saints finally gave up a touchdown but the defense stood tall at the end to preserve their ninth straight victory and clinch a playoff berth — the first team in the NFL to do so.

Making his third straight start in place of Drew Brees, Taysom Hill threw the first two touchdown passes of his career. But his fumble deep in Atlanta territory sparked a Falcons comeback.

Atlanta drove 85 yards, the Saints, capped by Matt Ryan’s 10-yard touchdown pass to Russell Gage with 7:43 remaining. New Orleans hadn’t allowed a touchdown since the opening drive of a game against San Francisco on Nov. 15, a span of 14 quarters without one.

The Falcons (4-8) got the ball back and again pushed deep into New Orleans territory. On second-and-2 at the Saints 13, Todd Gurley was stuffed for no gain. He got the ball again on third down, trying a sweep around the left end, but Demario Davis caught him for a 7-yard loss. The Falcons threw incomplete into the end zone on fourth down.

Aaron Rodgers connected with Davante Adams on two of his three touchdown passes and reached a couple of career milestones to help Green Bay (9-3) hand the Eagles (3-8-1) their fourth consecutive loss. Kingsley Keke had two of the Packers’ seven sacks.

Green Bay owned a 23-3 lead in the fourth quarter when the Eagles scored two touchdowns in a span of just over a minute. Rookie quarterback Jalen Hurts, who took over for an ineffective Carson Wentz midway through the third quarter, started it by throwing a 32-yard touchdown pass to Greg Ward on fourth-and-18. Jalen Reagor then delivered a 73-yard punt return to cut the lead to 23-16 with 6:30 left, though Jake Elliott missed the extra point.

The Eagles forced a second straight three-and-out, but couldn’t move the ball and punted. That’s when Jones put away the game.

Rodgers, who went 25 of 34 for 295 yards, increased his career touchdown passes to 400, the seventh NFL player to join that fraternity. The others are Tom Brady, Drew Brees, Peyton Manning, Brett Favre, Dan Marino and Philip Rivers.

SEATTLE (AP) — Alfred Morris scored a pair of third-quarter touchdowns and the New York defense shut down Russell Wilson and one of the top offenses in the league.

Double-digit underdogs, the Giants (5-7) handed Seattle (8-4) its first home loss of the season, sent the NFC West race into some mayhem, and kept their spot on top of the NFC East for another week.

Following its 0-5 start, New York has won five of its past seven, the last four in a row. New York had been close in tight losses to Tampa Bay and the Rams, but picked the perfect time to get its first victory over a team with a winning record.

And the Giants did it with starting quarterback Daniel Jones (hamstring) a spectator after getting hurt last week against Cincinnati. Colt McCoy was far from spectacular but made key plays and avoided critical mistakes following a first-half interception.

Wayne Gallman rushed for 135 yards on 16 carries for New York.

GLENDALE, Ariz. (AP ) — Jared Goff threw for 351 yards, Darrell Henderson ran for a crucial 38-yard touchdown and the Rams moved into a tie for the NFC West lead with Seattle. The Rams (8-4) have won three of four.

Los Angeles had a 24-14 lead early in the fourth quarter and looked like it was going to pull away until Nsimba Webster fumbled on a punt return. The Cardinals quickly turned the mistake into a touchdown on Kenyan Drake’s 4-yard run that pulled Arizona within 24-21.

The Rams responded as Henderson sliced through Arizona’s defense untouched for the 38-yard score that pushed it to 31-21.

The Cardinals (6-6) have lost three straight and four of their past five. Second-year Arizona quarterback Kyler Murray had an inconsistent game, completing 21 of 39 passes for 173 yards and three touchdowns. He also lost a fumble midway through the fourth and threw a pick-6 to LA’s Troy Hill, who ran it back 35 yards for a 38-21 lead.

Newton has four games this season with multiple rushing touchdowns, breaking the league record for a quarterback. He had three such games in 2011, an achievement he shared with five others, and has 10 in his career, three more than any other QB.

Newton’s 1-yard dive on the game’s opening drive and a 2-yard keeper up the middle in the second quarter gave him 11 rushing scores on the year. His most in a season is 14 as a rookie with the Carolina Panthers in 2011.

The Patriots (6-6) have won two straight and four of five to get back into playoff contention in the AFC. Los Angeles (3-9) suffered the worst loss in franchise history, eclipsing a 49-6 defeat to Kansas City in 1964. It was the first time since 2014 the Chargers were shut out.

Adrian Peterson scored from the 5 after Romeo Okwara strip-sacked Mitchell Trubisky with about two minutes left, capping a big comeback. Matthew Stafford threw for 402 yards and three touchdowns for the Lions (5-7), who came away with a wild win following a major shakeup after a Thanksgiving loss to Houston. They fired general manager Bob Quinn and coach Matt Patricia while elevating Bevell, their offensive coordinator.

Detroit trailed 30-20 early in the fourth period after Trubisky threw an 11-yard touchdown to Cole Kmet on a bootleg. Chicago’s Bilal Nichols then intercepted a short pass intended for Jesse James.

But the Lions turned things around down the stretch, sending the Bears (5-7) to their sixth straight loss.