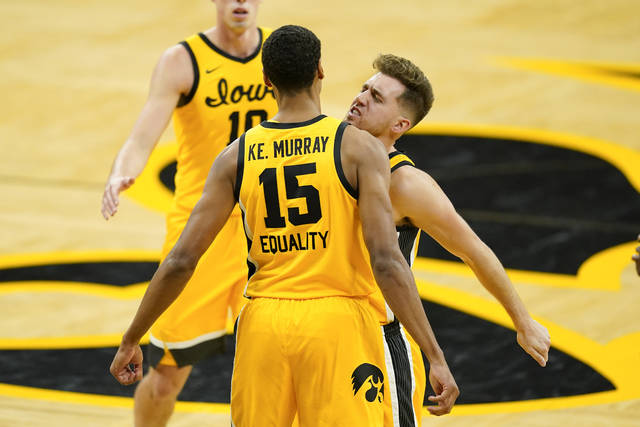 LAWRENCE, Kan. (AP) — Jalen Wilson hit the go-ahead 3-pointer with 42 seconds remaining, then watched as Marcus Zegarowski missed the last of three free throws after fouling him with 1.1 seconds left, allowing fifth-ranked Kansas to escape with a 73-72 victory over No. 8 Creighton on Tuesday night.

Wilson finished with 23 points and 10 rebounds. Christian Braun scored 14 points, missing a foul shot that could have clinched the game with 12.5 seconds to go, and David McCormack contributed 13 points as the Jayhawks (5-1) won their fifth straight against the Bluejays.

Denzel Mahoney gave Creighton (3-1) a chance down the stretch. He hit a 3-pointer with 1:22 left to get the Bluejays within 70-68, then picked the pocket of Bryce Thompson and coasted for the tying layup with just over a minute to go.

Zegarowski was fouled by Wilson on his tying 3-point attempt and hit the first two free throws before missing. He finished with 16 points. Mahoney led the Bluejays with 19 points while Christian Bishop and Damien Jefferson had 13 apiece.

Luka Garza, who came into the game leading the nation in scoring at 34 points per game, had 16 points and 14 rebounds for the Hawkeyes (4-0). He had his streak of 19 consecutive games scoring 20 or more points snapped.

Bohannon had scored 11 points in Iowa’s first three games this season. But he got hot from 3-point range, making 7 of 16 attempts, and converted his only shot from inside the arc.

CJ Fredrick had 21 points and Joe Wieskamp added 19 for the Hawkeyes.

Kofi Cockburn added 13 points for the Fighting Illini (4-1), who jumped to a 14-2 lead and never looked back. They led by 14 at halftime and didn’t let the margin slip below double figures after the break, handing the Blue Devils their second nonconference home loss in a week while playing without their famously hostile Cameron Indoor Stadium crowd amid the coronavirus pandemic.

Illinois led by 19 early in the second half, aided by 7-of-11 shooting on 3-pointers.

The Vols (1-0) didn’t get their first player into double figures until less than a minute remained when John Fulkerson hit two free throws to reach 11 points. Santiago Vescovi also scored 11.

Reserve Jeriah Horne scored 15 points for the Buffaloes (2-1), who had their own COVID-19 problems. They had a 10-day layoff, then traveled halfway across country to finally play a game.

McKinley Wright, who averaged 22 points in Colorado’s first two games, was handcuffed by the Vols’ defense. He scored six points in the first half and finished with eight.

Brockington hit 10 of 14 from the floor for the Nittany Lions (3-1), who used a 17-0 run early in the first half to grab the lead and never trailed again.

PISCATAWAY, N.J. (AP) — Ron Harper Jr. scored 26 points and Rutgers took over a close game down the stretch to beat Syracuse in the ACC/Big Ten Challenge.

Montez Mathis added 19 points for Rutgers (4-0), and Jacob Young had 18. Myles Johnson finished with 11 points and 12 rebounds to help the Scarlet Knights snap a 13-game losing streak to Syracuse with their first victory over the Orange since January 2003.

The former Big East rivals were meeting for the first time in seven years.

SOUTH BEND, Ind. (AP) — E.J. Liddell led five Ohio State players in double figures with 19 points as the Buckeyes rallied from 11 points down in the second half and held off Notre Dame in the ACC/Big Ten Challenge.