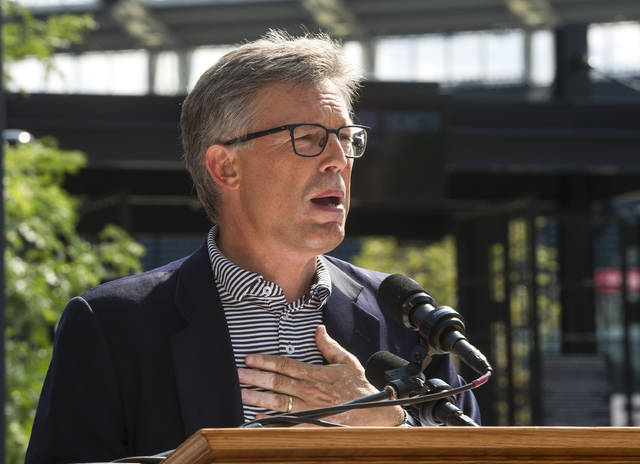 CLEVELAND (AP) — The Cleveland Indians are changing their name — they just don’t know to what or when.

Expressing that “it’s time,” owner Paul Dolan said that after months of internal discussions and meetings with groups, including Native Americans who have sought to have the team stop using a moniker many deem racist, the American League franchise is dropping the name it has been known by since 1915.

In an exclusive interview with The Associated Press on Monday, Dolan said: “The name is no longer acceptable in our world.”

Dolan said the team will continue to be called Indians until a new name is chosen. That “multi-stage” process is in its early stages and the team will play — and be branded — as the Indians at least through next season.

“We’ll be the Indians in 2021 and then after that, it’s a difficult and complex process to identify a new name and do all the things you do around activating that name,” Dolan said. “We are going to work at as quick a pace as we can while doing it right.

“But we’re not going to do something just for the sake of doing it. We’re going to take the time we need to do it right.”

Dolan said the team will not adopt an interim name until choosing its new one.

“We don’t want to be the Cleveland Baseball Team or some other interim name,” he said, adding he hopes the new name “will hopefully take us through multiple centuries.”

“It was a learning process for me and I think when fair-minded, open-minded people really look at it, think about it and maybe even spend some time studying it, I like to think they would come to the same conclusion: It’s a name that had its time, but this is not the time now, and certainly going forward, the name is no longer acceptable in our world,” Dolan said.

As Cleveland considers new names, Dolan said Tribe, the team’s popular nickname for decades, has been ruled out.

“We are not going to take a half-step away from the Indians,” said Dolan, acknowledging Tribe was an early choice. “The new name, and I do not know what it is, will not be a name that has Native American themes or connotations to it.”

The decision was welcomed by Native American groups that met with the club.

“The team made a genuine effort to listen and learn,” said Cynthia Connolly, executive board member of the Lake Erie Native American Council in the Cleveland Indigenous Coalition. “We hope this serves as a blueprint for other professional teams and the 200-plus high school teams in the Ohio area. If there is a school or team that truly cares about fighting racism, these mascots cannot coexist.”

The name change by the Indians is the latest by an organization reacting to a national movement, which gained momentum in the wake of widespread civil rights protests last summer, to have prejudicial names and symbols removed.

Across the South, Civil War monuments were taken down, and in some cases names were taken off buildings.

“I spent a lot of time with the Native Americans, especially the Cheyenne tribe in Montana, and I grew up with a lot of Navajo kids in Southern California,” he said. “And so I think I think that it’s apropos. And it’s as good for the times and it’s been a long time coming.”

Dolan said his “awakening or epiphany” came following the death of George Floyd, a Black man who died while being arrested by white Minneapolis police officers this summer.

Cleveland’s announcement was praised by Washington NFL coach Ron Rivera, who said his perspective changed after reading “The Real All-Americans,” a novel about a Native American football team.

Rivera said he received angry letters from Washington fans who were upset with the name change.

“But I’ve also gotten some notes from Native Americans that have said thank you for doing that and for respecting our wishes,” Rivera said. “The one thing I hope is that we don’t forget them. We don’t ignore them. We start paying attention to their plight and do right by them. They are Americans that do deserve the respect of us.”

Dolan knows there are plenty of Indians fans who disagree with the decision.

“I consider myself a fifth-generation Clevelander,” he said. “It’s in our blood and baseball and the Indians are synonymous, and that goes to the whole intent versus impact thing. Nobody intended anything negative by our attachment to the name Indians, but the impact has been tough.”

Cavaliers forward Larry Nance Jr. grew up in the Cleveland area and has always followed the Indians. He said the change is overdue.

“To me if the Native American people don’t appreciate that name, then it’s time to go,” Nance said. “I’m not just a fan of the Cleveland Indians, I’m a fan of Cleveland baseball. If they change their name to whatever it may be, the Spiders, the Guardians, whatever it is, I’m still going to be a fan.

“Just because they changed the name doesn’t mean I stop loving the players, stop loving the manager. If it makes a group of people feel less marginalized, then I’m all for it,” he said.

It was only hours after Washington’s decision in July that Dolan announced a thorough review of Cleveland’s name. In recent months he met with fans, business leaders and researchers focused on Native American culture and issues.

Dolan called those conversations “both enlightening and challenging.”

He added there’s a delicate balance between moving ahead and looking back.

“We’re not walking away from our past,” he said. “We’ll be the Cleveland Indians of 1915 to whatever year is that we ultimately change. We will always celebrate that. I don’t think we have to ignore it.”

Cleveland’s name change comes on the heels of the team removing the controversial Chief Wahoo logo from its caps and jerseys in 2019.

Dolan’s family bought the Indians in 2000, and even then he knew Chief Wahoo “was problematic.” It was only after this summer’s unrest and in educating himself on Native American issues that he recognized Indians in the same light.

“There is definitely some pain in this. It’s the end of an era or the beginning of an era. But accompanying that is the recognition and maybe even excitement that we’re going on to do something that is better. It will be better for the community. It will be better for our team. And it will be something hopefully that unites everybody. It’s not anything that we have to feel any kind of reluctance about expressing,” he said.

“It’s going to take some time for everybody to embrace but I think when they do, we’ll all be better off for it.”

This story has been corrected to fix a quote to refer to 200-plus high school teams in the Ohio area, not Cleveland.