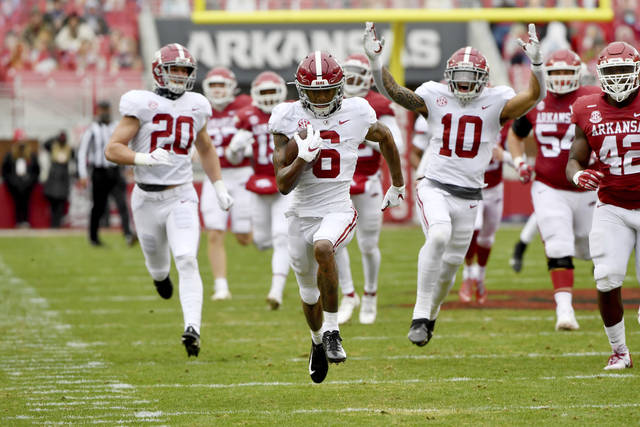 In fact, where the semifinals will be played might be more in doubt than who will play in them.

The top five teams were locked into their places Tuesday night for the fourth straight week, with the Crimson Tide (10-0) leading the way as it prepares to play Florida for the Southeastern Conference championship.

The Fighting Irish (10-0) are second and Clemson is third going into their Atlantic Coast Conference championship game.

Ohio State (5-0) is fourth going into the Big Ten title game against Northwestern, and Texas A&M is on deck at No. 5. The Aggies play at Tennessee in their last regular-season game Saturday.

If all the favorites win — that includes Clemson (9-1) in the rematch with Notre Dame — the current top four likely would be reordered a bit and placed in the semifinals.

If the Irish beat the Tigers for the second time this season, the selection committee’s job becomes a little trickier.

Florida (8-2) dropped only one spot to seventh after losing as a big favorite to LSU. Georgia (7-2) is eighth and Cincinnati (8-0) is ninth after not playing for two weeks because of COVID-19 issues.

The unbeaten Bearcats host Tulsa, which is 23rd, in the American Athletic Conference title game.

The semifinals are scheduled to be played Jan. 1 at the Rose Bowl in Pasadena, California, and the Sugar Bowl in New Orleans.

The current COVID-19 restrictions in California will prohibit the Rose Bowl from having any fans in attendance, including family members of the players.

“As we move forward with our planning, we continue to hope that the Rose Bowl’s appeal to government officials to allow the families of student-athletes to attend will be permitted, just as student-athlete families will be welcomed at the Sugar Bowl, the other New Years’ Six games and the Championship game in Miami,” Hancock said in a statement.

During a conference call with reporters Tuesday night, Hancock declined to say if the game would be moved out of California if the restriction was not lifted.

“Given the realities of 2020, we always reserve the right to make decisions as late as possible,” he said.

Game organizers with the Tournament of Roses continue to plan to host a semifinal.

“Under current California state guidelines, we are unable to allow for spectators of any kind at the game, however, a second appeal has been made at the state level to allow for a special exemption for player and coach guests,” the Tournament of Roses said in a statement. “We continue to work with the College Football Playoff and local health officials to provide the safest possible environment at our game.”