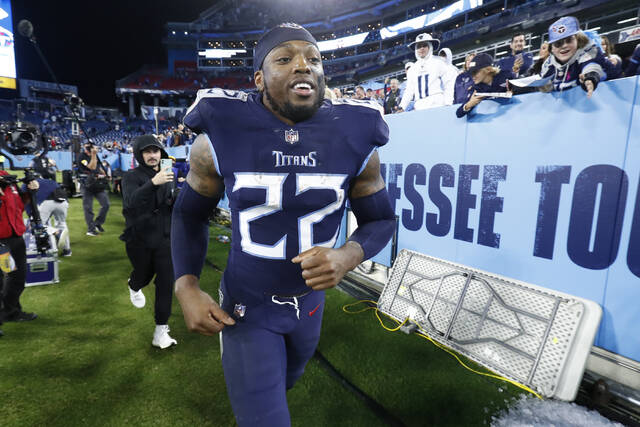 NASHVILLE, Tenn. (AP) — The Tennessee Titans may be without NFL rushing leader Derrick Henry for the rest of the season depending on tests Monday checking the severity of an injury to his right foot.

Henry was having tests on the foot after finishing a 34-31 overtime win in Indianapolis, according to a person with direct knowledge who spoke to The Associated Press on condition of anonymity because the Titans have not commented on the injury.

ESPN.com first reported the injury and its potential severity.

The two-time NFL rushing champ went to the bench early in Sunday’s game and took his shoe off before returning. Henry finished with 28 carries for 68 yards and a 2.4-yard average that was his lowest this season. He played 54 of the 73 offensive snaps.

The 2020 AP NFL Offensive Player of the Year did not talk to reporters after the game.

Henry leads the NFL with 937 yards rushing and 10 touchdowns. He also has a league-high 219 rushes, well ahead of the next leading rusher Joe Mixon of Cincinnati (137).

He is the biggest reason why the Titans (6-2) currently sit atop the AFC as the No. 1 seed having won four in a row.

Ryan Tannehill threw three touchdown passes Sunday against the Colts to reach 10 TDs this season compared to Henry, who had his 10 TD runs through the first seven games.

The Titans visit the Los Angeles Rams (7-1) on Sunday night.

Henry became the eighth man in NFL history to run for at least 2,000 yards last season with 2,027 yards on a career-high 378 carries. The 2015 Heisman Trophy winner and two-time Pro Bowl running back had a combined 386 carries in the 2019 season and playoffs.

The Titans are fourth in the NFL, averaging 147.6 yards rushing per game, helping them rank second in the league in averaging 32 minutes, 49 seconds of possession time per game.