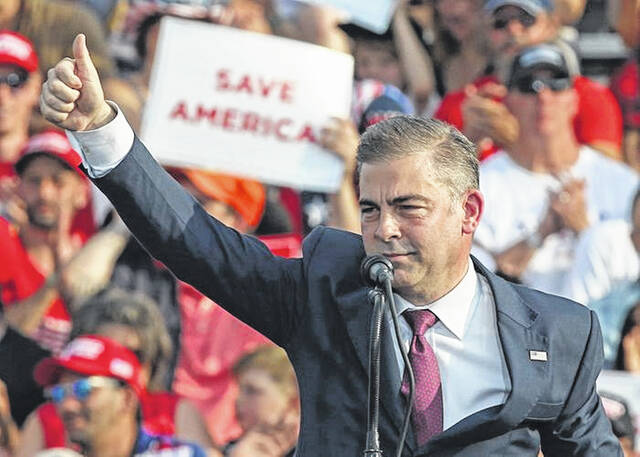 The election results will leave Democrats with a 221-213 advantage over Republicans in Congress, with Brown and Carey each retaining a seat for their respective party. A third open congressional seat in Florida, where primaries were being held Tuesday, also is very likely to remain status quo and in Democratic hands.

Carey, 50, defeated Democratic state Rep. Allison Russo, a public health policy consultant, in the 15th Congressional District, after the most competitive race there in years. The previous officeholder, Republican Steve Stivers, resigned in April to become CEO of the Ohio Chamber of Commerce after a decade in Congress.

Because the seat is vacant, Carey will take office immediately.

Carey told celebrants at a victory party Tuesday: “We have too many career politicians in Washington. That’s the last thing that I will ever be.”

Both winners will fill the remainder of their predecessors’ unexpired terms, which run until January 2023. To hold onto their seats, they must face reelection again next year under a congressional map that’s being redrawn.

Former President Donald Trump endorsed Carey, calling him a “courageous fighter” and visiting the state to campaign for him, as did former Vice President Mike Pence.

Trump congratulated Carey in a statement Tuesday, saying he was proud to have endorsed him “early and strongly” and saying he would be “a great congressman!” President Joe Biden endorsed Russo, who raised more money in the district than any Democrat in history.

Brown’s election in the northern part of Ohio marks a win for establishment Democrats, who sought to defend the district against a takeover by progressives. Her backers included Hillary Clinton, U.S. Rep. Jim Clyburn and several labor unions.