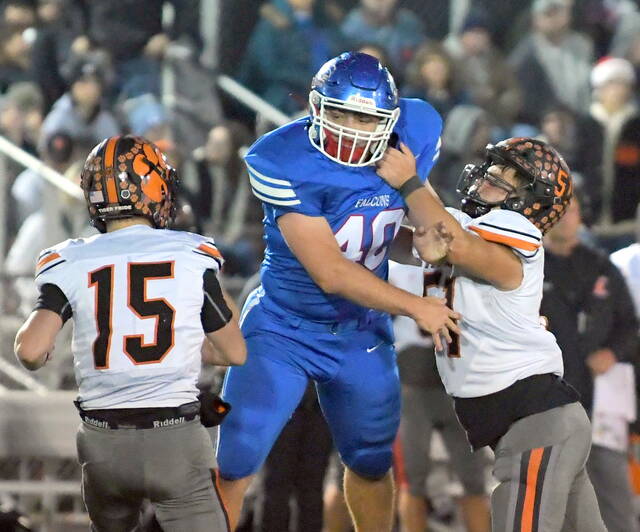 ADAMS TOWNSHIP — After going the entire season without uttering the school’s name, Clinton-Massie head coach Dan McSurley only waited a few moments after Friday’s 49-28 win over Waverly in round two of the Region 16 playoffs to speak of them freely.

Once again, two of southwestern Ohio’s powerhouse programs will meet in the playoffs. The two schools will play next Friday at a neutral site to be announced Sunday by the OHSAA.

Over the last 11 seasons, Clinton-Massie and Wyoming have represented the region in the state semifinals seven times, winning three state championships.

The Falcons (10-1) punched their ticket to the regional semifinals by bullying Waverly (9-2) with an unstoppable running attack.

If you take away the drives that ended the first half and the game, Clinton-Massie only had one offensive drive that didn’t end in a touchdown.

“Offensively, they couldn’t stop us,” McSurley said. “It’s cold; we run the ball. This is November football right here. We felt like we could do whatever we wanted on offense.”

Like a boulder rolling downhill, the Falcon rushing attack became more unstoppable as the night went on. After rushing the ball 25 times in the first half for 188 yards, Massie gained 287 yards on the ground in the second half on 28 carries.

“They had to choose,” McSurley said. “You take the fullback, Carson kills you. That’s the beauty of the wishbone. It’s hard to stop four guys.”

McSurley credited Zantene for his work leading the offense. While he might not have the passing numbers that other quarterbacks have, McSurley noted not to overlook his work making the Falcon offensive machine go.

“Kody was checking (into) some great plays,” McSurely said. “A lot of those (big plays), he checked to. When you have a quarterback playing at that level — his passing numbers don’t dictate it — but he commands the offense. He’s a leader on the field. People don’t always value what he does getting us into the right play. He did a great job.”

Waverly hung tough in the first half and could have been closer at the break if not for an unfortunate series of events.

The Tigers marched the ball down the field early in the second quarter, trailing 14-6. On fourth and three from the CM 5, Wade Futhey tried to zip a pass to Will Futhey. He evaded a defender and pulled in a juggling catch at the five. He appeared to have smooth sailing to the end zone.

He slowed down just before crossing the plane of the goal line and stuck the ball out. As he extended it, Carter Euten knocked it free and recovered the fumble. The Tigers pleaded with the side judge claiming that Futhey had broken the plane, but the official shook his head no.

“The thing we’re doing right now is having defensive players around the ball,” McSurley said. “So we’re hustling, we’re pursuing the ball, we’re flying around. If you’re not doing that, you don’t make that play. We just want guys flying to the football and making plays.”

However, the Tiger defense bailed its offense out by forcing a three-and-out on the ensuing drive. However, the ensuing punt was muffed and recovered by Clinton-Massie at the Waverly 42.

Six plays later, Vanhoose scored to put the Falcons up 21-6 with 1:22 left in the first half.

Penn Morrison tried to keep the Tigers in the game by returning the ensuing kickoff 75 yards for a touchdown to make the halftime deficit 21-14. However, Waverly couldn’t stop the Falcons and couldn’t overcome three fumbles and two interceptions.

Before last year’s Wyoming win in the regional finals, the Falcons had had the Cowboys’ number. Wyoming had not defeated Clinton-Massie prior to last year since 2001. Massie had beaten them in the 2017 regional finals and the first round of the playoffs from 2005 to 2007.

“We’re so happy to be going in against Wyoming,” McSurley said. “I’ve never uttered the word ‘Wyoming’ all year, until now. We’re going to start uttering ‘Wyoming’ for the next six or seven days.

“I’ve been waiting a whole year for this.”