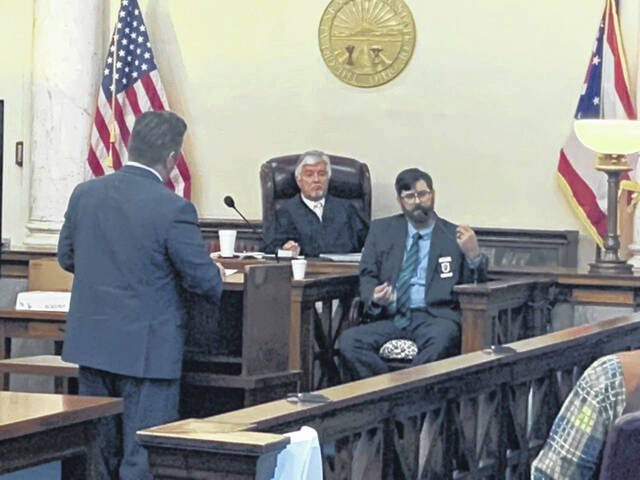 WILMINGTON — The victim and the suspect each gave their sides of the story in Clinton County Common Pleas Court Wednesday.

On the third day of a scheduled three-day jury trial of Brian Liming, 44, of Jamestown — who allegedly shot an officer with the Ohio Department of Natural Resources (ODNR) Wildlife Division — he and ODNR Officer Kevin Behr each took the witness stand.

When asked to recall what happened on December 20, 2020, Behr remembers getting a decoy set up when he heard a noise.

Behr, wearing full camo gear and clothing, stated he got down on his hands and knees. He then felt what he described as a “sledgehammer” to his buttocks area followed by an intense burn, then he heard the shot.

He said remembers seeing Liming come up and stating something along the lines of, “you stupid mother (expletive),” though Behr advised he couldn’t recall precisely what was said.

During Liming’s testimony, he said he couldn’t recall saying anything like that. Liming testified he tried to find his phone to call 911 but struggled due to the multiple layers of clothing he was wearing.

Based on that, Behr told the court he was afraid Liming was either going to shoot him again or possibly run him over.

During his testimony, Behr told the court about the various medical procedures and the extent of his injuries. He advised his pelvis was shattered and many of his internal organs were damaged. He said he now has to have a colostomy bag at all times and he now walks with two walking sticks, similar to hiking poles.

He advised he doesn’t hate Liming but feels sorry for him.

During his time on the stand, Liming admitted he should not have had the gun due to his weapons disability. Liming also added he was there to just help collect a deer and not hunt. When asked why he had the gun, he said he was hunting coyotes.

When asked why he ran and lied to authorities upon being confronted, Liming said he was in a panic and scared because he was on probation.

During closing arguments, defense attorney Brock Schoenlein argued that Liming wasn’t reckless with his shooting since he didn’t know Behr would’ve been there.

Clinton County Prosecutor Andrew McCoy during his closing statement felt the defense was trying to gaslight the jury and also trying to blame Behr since he was wearing camo.

McCoy retorted it was still reckless behavior due to Liming hunting without a license, with a gun he shouldn’t have had, and on property he shouldn’t been on.

The trial recessed until Thursday.