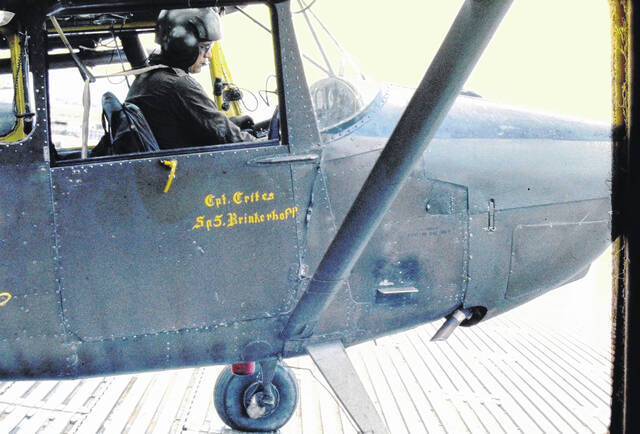 This is the first in a two-part series in honor of Veterans Day, Nov. 11.

The spring planting is about to get underway on the Crites farm on Ogden Road, but Harold’s attention had turned from planting — to his wife, Jean.

It was the third day of March 1946, and Jean was about to deliver their first child.

Harold was — as patiently as could be expected — waiting when the quiet of the place known as “The Old Hale House” was broken by the sound of a baby boy, Harold Fredrick, announcing his arrival.

Young Harold (“Hal”) would spend his youth working on the family farm, later with his two younger brothers, Jack and Joe. There were plenty of chores around the farm to keep young Hal busy.

But his mother’s musical talents — which coincided with her profession as the sole music teacher for the entirety of the Clinton County School System — was not lost on him.

Crites played in the Wilmington High School Marching Band, and later played his baritone horn in The Ohio State Marching Band, also known as “The Best Damn Band In The Land.”

But this was far from Hal’s only activity at OSU.

“Crites, Harold F.” was there on a U. S. Navy ROTC scholarship, but only until he learned that the Navy was not thrilled with the fact he had a steady girlfriend. Unbeknownst to Hal, he was about to make what would turn out to be a life-altering decision — between the Navy or his girlfriend.

When Crites met with his advisor, he had only one question: “What is the easiest ROTC to get in?”

The advisor’s response was, without hesitation, “The Army.” And as quickly as his advisor’s response to his question, you could almost hear the old Tell Taylor & Ole Olsen tune “You’re in the Army now, You’re not behind a plow” echoing throughout the building.

Hal completed his studies as a U.S. Army Cadet at Ohio State in 1968, and he was honored as a “Distinguished Military Graduate.”

Immediately after graduation he was commissioned, and the transition from college life to Army life began. It was a relatively short drive from Clinton County to Fort Knox, Kentucky, where Crites began a journey that would take him to Southeast Asia via Germany and various locations in-between.

As with most all newly commissioned officers, Crites started his career in the Army as a student; however, in his case, he first instructed a portion of the “Armor Officer Basic Course” that he would later complete as a student.

From Fort Knox, he would then serve in Ketchikan as a Platoon Leader and Company Maintenance Officer and then he served in Wurzburg, Germany.

In Wurzburg he was placed in charge of a warehouse until he was accepted for Basic Flight School at Fort Stewart Georgia.

After successfully completing the basic course, he was off for Advanced Flight Training, Fixed Wing, at Ft. Rucker, Alabama before receiving the orders that would take him across yet another ocean.

This position was short lived, however, as he found himself “flying” a desk, in the company of three full colonels, 19 lieutenant colonels and a plethora of majors.

One day, while contemplating his position and his desire to do that for which he had been trained, Hal began thumbing through the Army’s local directory of personnel and found the phone number for the officer who had sent him flight school.

A phone call and exchange of pleasantries was quickly followed by Crites’ straightforward question: “Can you get me outa’ this and get me a flying job?”

Fast forward two weeks and he was on his way to Vinh Long and the Headquarters of the 221st Reconnaissance Airplane Company for orientation — which consisted of proving he could still fly and navigate — before he was given his next assignment.

The next two months would find this baritone-playing farm boy from Wilmington, Ohio one-quarter mile from the Cambodian border, in a place known as Chau Doc on an abandoned WWII airfield that was used then as a Japanese fighter base.

From this single-strip airfield in the Mekong Delta, where the water would come to within six inches of the runway during the rainy season, his “Area of Operation” covered seven provinces of South Vietnam.

One of the unique challenges that faced U.S. military personnel during the Vietnam War was the requirement to secure permission before returning fire. This situation was exasperated when flying as the pilot might have to gain permission from more than one Province Chief.

Waiting sometimes for a half hour or more, on two occasions, Crites’ crew member was wounded while awaiting permission.

Bird Dog (Cessna Y-19 “tail dragger”) Pilot Crites’ mission during this assignment was in support of the 9th ARVN (Army of the Republic of Vietnam), U.S. Special Forces’ A and C Teams, a New Zealand Team and various Naval Units. In the performance of the overall mission, his duties included registering artillery, directing artillery, airstrikes … whatever was needed on any particular flight.

Almost all flights were called “First Light” flights, which meant being airborne by dawn. The village of Chau Doc lay between the airfield and compound where they were bivouaced, meaning they would have to travel through the village in the dark.

Upon his arrival, Crites and company’s only means of transportation was a very noisy 10,000-pound, all-terrain forklift that would inevitably draw sporadic gunfire as they traveled the narrow streets to the airfield.

Not being one to remain silent about certain hazards to his health, Crites complained to his company commander, who repeatedly told him he was not authorized to have a Jeep, so it became incumbent upon Crites to handle the situation himself.

The deal was sealed with a case of scotch and Crites’ crew chief, armed with a pair of bolt cutters, departed on board the helicopter for Saigon.

Some 40 minutes later the Chinook returned to Chau Doc with the crew chief and the frequently requested and denied Jeep. Without delay, the Jeep which would be sporting the Bird Dog insignia was repatriated from a group of unauthorized Vietnamese.

Now Captain Crites was once again on the move to a new assignment, to Chi Lang as the Airfield Commander and Aviation Section Commander.

This was an ARVN training base and was occupied by Vietnamese personnel, with the exception of the 22 Americans that comprised a MACV — Military Assistance Command Vietnam — team, of which Hal was one. Hal’s quarters there was a French villa; however, there was one air-conditioned space — the Communications Bunker, which now doubled as the company bar.

As Section Commander, Hal was responsible for three official duty Bird Dogs and three additional aircraft for what was then a “secret” mission. The three traditional duty Bird Dogs were stationed, one each, at Chau Doc, the island of Phu Quoc, and with Crites at Chi Lang.

In addition to normal flight operations, the steel plank runway was also used as a helicopter refueling location.

The “secret” mission planes were mainly utilized in air cover operations for the cargo-laden, ocean-going ships that would, during the rainy season, travel up the Mekong River to Phnom Penh.

These Bird Dogs would fly at 10,000 feet acting as a radio re-transmission vehicle, maintaining communication between the helicopter gunship teams and Saigon.

The “Area of Operation” aircraft would fly interdiction missions to curtail the Viet Cong from bringing supplies into Vietnam from Cambodia. The mission was concluded at the end of Crites’ tour in November 1971.

While flying Bird Dogs in Vietnam, Hal was shot down three times. He safely landed on a rice paddy dike each time and was promptly picked up by a helicopter gunship.

The only close call Crites recalls is the time his emergency radio was shot from his leg.