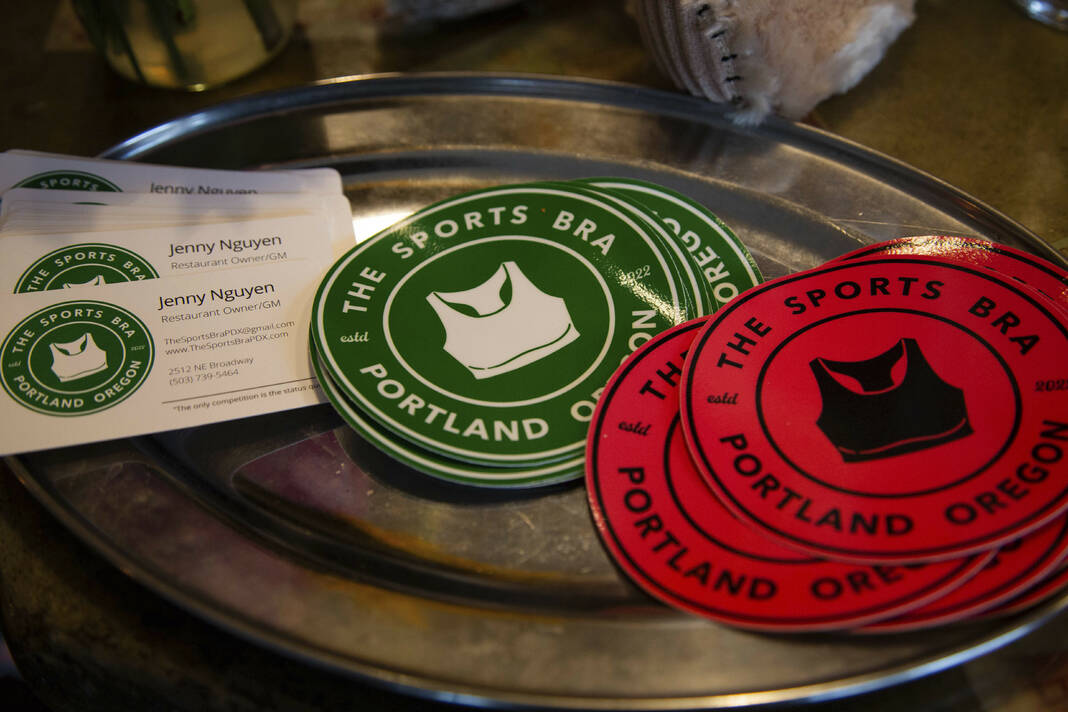 Jenny Nguyen and about a dozen of her friends wanted to watch the NCAA women’s basketball championship game, which didn’t seem too much to ask at a sports bar with 32 televisions.

“None of them had that game on,” Nguyen recalled, “which is shocking to me.”

No problem. A server agreed to switch one of the TVs to the big game. Granted, it was the smallest screen in the place, over in a corner, where they didn’t even bother to turn up the sound.

Nguyen was just glad to get a glimpse of one of the great games in NCAA Tournament history: Notre Dame rallying to beat Mississippi State on a 3-pointer with a tenth of a second remaining.

“I remember jumping up and down,” she said, “and then looking around the restaurant and realizing we were the only ones watching this game.”

On the way out, one of Nguyen’s friends made an even more poignant observation.

“It would have been so much better if the sound was on,” she said.

Then and there, a revolutionary idea was born.

Welcome to The Sports Bra.

From that epiphany four years ago, Nguyen realized her dream to launch a bar dedicated solely to women’s sports.

It opened on April 1 in Portland, Oregon, where any talk of The Sports Bra being nothing more than a joke (granted, its double- entendre mantra is “We Support Women’s Sports” ) were quickly erased by the big crowds that lined up outside the door each day.

“One thing I wanted to be intentional about with The Sports Bra is we’re not reinventing the wheel as far as sports bars go,” Nguyen said. “They’ve been around for decades. There’s a way about them that’s very endearing and has that comfortable feeling.”

Of course, this isn’t just any other sports bar.

That’s apparent from far more what’s showing on the five TVs, which are exclusively devoted to women’s (and a bit of coed) sports.

The walls are lined with memorabilia dedicated to women athletes and teams. The drink and food menus are largely gleaned from women-owned businesses, brewers and distilleries. The two restrooms are gender neutral. Nguyen makes sure to provide gluten-free, vegetarian and vegan options, all with a goal of being as inclusive to her guests as possible.

That’s not to say one won’t find some of the more traditional sports bar offerings.

“We have burgers and nachos and tater tots,” Nguyen pointed out.

Robin DiPietro, a college professor at the University of South Carolina, stopped in at The Sports Bra for the first time this week while on a West Coat vacation.

“I think every city needs a women’s sports bar,” DiPietro said. “I hope it becomes a trend. We don’t have enough places where we can go watch women’s sports.”

As the 50th anniversary of Title IX was commemorated this week, it was only natural that much of attention was on major advancements made by women athletes in the wake of the landmark legislation, countered by how much further they have to go to gain true equality with their male counterparts.

But let’s not forget smaller gestures that help advance the cause.

A single bar dedicated to women’s sports may not sound like much, yet it could be the catalyst for something far bigger. Nguyen is keenly aware that her mission goes beyond good food, tasty drinks and making sure the TVs are turned to the WNBA or the NCAA softball championship or a soccer match featuring the hometown Portland Thorns.

The communal nature of fandom has always been a huge factor in the success of men’s sports. There’s no reason it shouldn’t be that way for the games women play.

“When I first conceived of The Sports Bra, when I first started to do it, I had no idea it would be what it is,” Nguyen said. “But now I’m seeing it as part of the movement, a domino in a wave of dominos.

“It’s good business to invest in women,” she added. “It’s just a matter of time before people latch onto that and see that when a community is moving forward toward equity, everybody wins. Not just women. Equality is good for everybody.”

Nguyen, a first-generation American whose parents emigrated to Portland during the Vietnam War, is especially passionate about basketball. She took up the sport around the age of 5 and was set to play at a community college when she blew out a knee a week before her first game.

That was also around the time she came out as a lesbian, so she was dealing with a lot of conflicting feelings. Lonely and depressed, Nguyen decided for an entirely fresh start at Western Washington University.

It was there she discovered a passion as great as basketball.

“I realized I had been completely spoiled by my mom’s cooking,” Nguyen remembered. “When I got to college, I found it quite difficult to get good food. That’s when I started cooking.”

She got the same feeling in a kitchen that she found on a basketball court. A calmness. A peace.

After graduating from Western Washington, she enrolled in culinary school and launched her life in a new direction.

Then, during the tumultuous summer of 2020, when the country was dealing with a devastating pandemic and a racial awakening, Nguyen decided she had to do something to make the world a better place. She knew it should involve cooking. Her girlfriend reminded her of their idea for The Sports Bra.

Despite the obvious struggles in launching a new business — especially in an industry that took a huge blow from COVID-19 — Nguyen wrote up a business plan, cleaned out her savings account and borrowed some money from family and friends.

She still didn’t have enough to get a sports bar off the ground, so she launched a fundraising effort on Kickstarter. She set a goal of $48,000. Within 30 days, she had raised some $105,000.

Business has been brisk since The Sports Bra opened, with Nguyen estimating roughly a quarter of the clientele is men.

“It turns out that when a person, any person, is watching sports, they honestly don’t care who is playing,” she said. “They just love sports, love to watch sports.”

The rousing success of The Sports Bra has persuaded Nguyen that her idea can work in other cities. When she wrote up her first business plan, she mentioned franchising and estimated that perhaps a dozen other cities would support a women’s sports bar.

Now, she believes that target was too low. On Thursday’s 50th anniversary of Title Ix, she issued the #channelchangechallenge on Instagram, encouraging people to ask their favorite sports bar to change one TV once a day to a women’s sports event.

“If one bar changes a channel,” she said, “and two women or two men or whoever shows up to watch, that’s a win for everybody.”