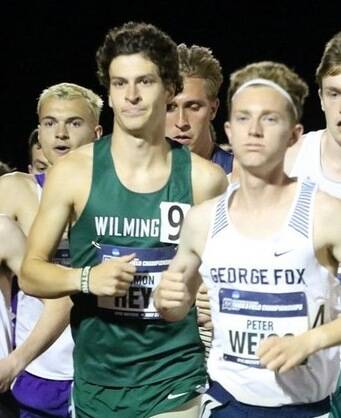 Heys’ honor capped a flurry of activity for WC track and field athletes.

Burke, who came back for a fifth year of outdoor track and field, had the nation’s 32nd-best time in the 400-meter hurdles at 1:03.83. Although narrowly missing out on qualification for nationals, Burke was third in the Great Lakes Region and ran a leg of two Fightin’ Quaker All-OAC relays in the 4×100-meter and 4×400-meter relay events.

Heys, a cross country All-America runner in the fall, was ranked third in the Great Lakes region in the 10,000-meter run (29:38.89) and fourth in the 5,000-meter run (14:19.55). He finished second in both events at the Ohio Athletic Conference Outdoor Track & Field Championships.

Durr, the OAC champion in the hammer throw, boasted a career-best mark of 180-1 which was also the third-highest throw in the event in the Great Lakes Region. He finished the year ranked No. 27 in the country.

Pacifico, also a hammer thrower, heaved a season-best mark of 178-1 that finished fourth at the OAC Championships, fifth in the Great Lakes Region and 35th in the nation.

In order to garner All-Region honors, individuals needed to be top five in their respective events in each region.

Heys, a junior, has been the top distance runner for the Fightin’ Quakers during the indoor and outdoor track seasons. A holder of eight program records (four indoor and four outdoor), he finished 12th in the 10,000-meter run (31:13.86) at the NCAA Division III Outdoor Track & Field Championships in Geneva, Ohio, in late May. Heys aided WC to a third-place finish at the OAC Outdoor Track & Field Championships, where the Quakers scored more than 100 points for the first time since 2004.

A sport management major, Heys carries a 3.89 cumulative grade point average (GPA) and has been actively involved in some of the program’s hands-on learning opportunities, working the College Football Playoff title game, the Super Bowl, the Flying Pig Marathon and others.