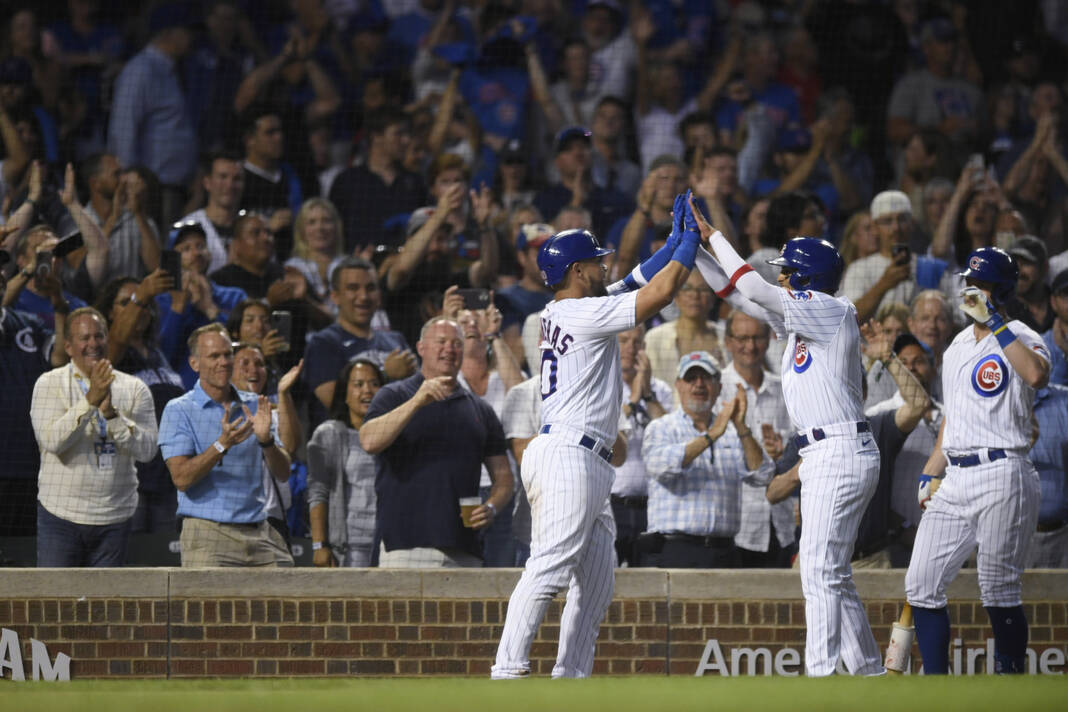 CHICAGO (AP) — Christopher Morel unleashed a laser from center field toward the plate. In a flash, the Cubs let loose.

Morel’s rocket throw to cut down Tommy Pham trying to score on a fly to center got the Cubs out of a bases-loaded jam and helped propel them to an 8-3 win over the Cincinnati Reds on Wednesday night.

Contreras homered for Chicago. Morel also went deep, but the play that stood out came with the Cubs clinging to a 1-0 lead with one out in the fourth inning.

Donovan Solano sent a line drive to center. Morel took a few steps to his left, made the catch and, with his momentum going toward the plate, fired a 97.3 mph pellet on one hop.

Contreras hauled in the throw a little up the third-base line and reached to his right to tag Pham on the letters on his back as he slid by, ending the threat. The jubilant catcher let loose.

Steele, backing up the play, might have been even more fired up than Contreras.

“I really did not want that run to score,” he said. “That was pretty sick for him to throw him out there. I was pretty fired up there. It was pretty cool to watch.”

Contreras got hit by a pitch and scored on a double by Ian Happ against Hunter Greene in the first inning. He made it 5-0 in the fifth when he lined a two-run drive against Luis Cessa for his 13th homer — tops among major league catchers — and also doubled twice.

Morel singled and scored in the fifth. He added a two-run homer deep into the left-field bleachers in the sixth against Ross Detwiler, bumping the lead to 7-1.

Nico Hoerner extended his hitting streak to seven games, matching a career high, when he smacked a two-run double in the fourth. He finished 1 for 3 after five consecutive multi-hit games.

Steele (3-5) exited with a 5-1 lead after Joey Votto doubled in a run with none out in the sixth. The left-hander gave up six hits and struck out six.

Scott Effross retired the next three batters, and the Cubs bounced back after opening a three-game series between the two worst teams in the not-so-great NL Central with a 5-3 loss.

Cincinnati has lost nine of 12.

Reds: OF Tyler Naquin (strained left quad) is scheduled to begin a rehabilitation assignment Thursday for Triple-A Louisville. … The Reds reinstated RHP Jeff Hoffman from the injured list and optioned RHP Jared Solomon to Louisville while adding him to the taxi squad.

Cubs: OF Seiya Suzuki (sprained left ring finger) is scheduled to begin a rehab stint with Triple-A Iowa on Thursday. He has not played since May 26. “We’ve missed him,” manager David Ross said. “I think he’s a big part of what we’re doing here moving forward. The more experience he can gain, the better — better for us and him, speed things up for where we want to go.” Suzuki, who left Japan for a five-year, $85 million contract, is batting .245 with four homers in his first season with Chicago. … Ross said OF Jason Heyward (sore right knee) is not improving, and the Cubs will have to ”take a hard look” at his situation. … RHP Marcus Stroman (right shoulder inflammation) and LHP Drew Smyly (strained right oblique) will throw bullpens in the next few days.