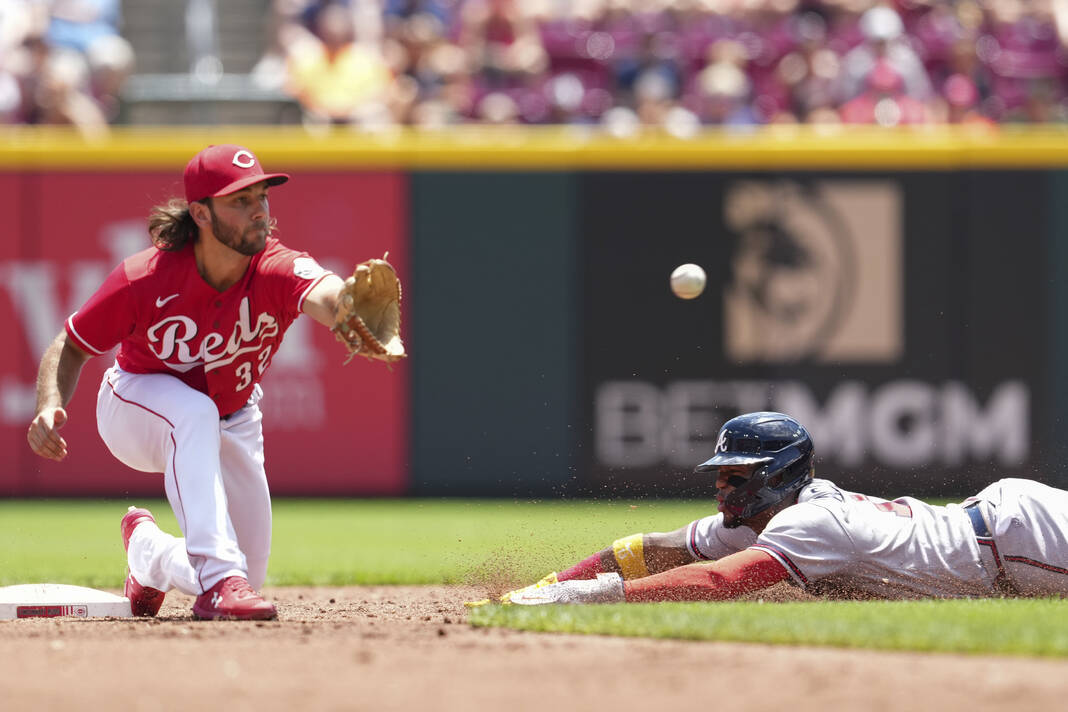 CINCINNATI (AP) — Albert Almora Jr. slapped a bases-loaded single past a drawn-in infield in the ninth to give the Cincinnati Reds a 4-3 win over the Atlanta Braves on Sunday.

“I didn’t try to do too much,” Almora said. “It was the most excited I’ve seen the bench when we went ahead in the eighth. We needed that.”

A day earlier, Almora would have been the go-ahead run, but flied out to the warning track with the bases loaded. “I hit the ball better yesterday but this one worked out,” he said.

Not only did the Reds avoid a series sweep, but they also snapped a 10-game losing streak at Great American Ball Park — the longest home losing streak for the team since losing 11 straight at Riverfront Stadium in April-May 1986.

Braves reliever A.J. Minter allowed a single to Tommy Pham before walking Joey Votto and hitting pinch-hitter Jonathan India to load the bases with no outs in the ninth. Almora delivered his base hit past a diving third baseman Austin Riley.

There were great at-bats leading up to (Almora’s) hit,” Reds manager David Bell said. “Joey’s done it so many times. The focus that it took to take those pitches really shows his greatness. They are trying to make a perfect pitch and not swing at them is what makes him great.”

It was the first walk-off hit of the season for the Reds, who had been held to just one hit through seven innings by Braves starter Charlie Morton. The 38-year-old struck out 10 and issued a walk in his third seven-inning appearance of the season.

“It was nice to go out there and throw strikes,” Morton said. “I was working ahead of guys but nothing really different from what I’ve been doing.”

The Reds went up 3-1 in the eighth in part with a two-run double to right field from Brandon Drury.

The Braves tied it in the ninth on homers from Marcell Ozuna — his second of the afternoon — and Michael Harris II. Hunter Strickland (1-2) got the win despite allowing those home runs.

“We’ve gotten used to games like that from Luis but we can’t take them for granted,” Bell said.

Braves: OF Adam Duvall was sent back to Atlanta for an MRI after being hit by a pitch on his left hand Saturday. The Braves wanted confirmation that there were no broken bones.

Reds: Max Schrock started at second base instead of India, who had a rest day before pinch hitting. … SS Kyle Farmer is expected to miss a few days after being hit on the left hand with a 100 mph pitch Saturday, but nothing is broken. … Catcher Tyler Stephenson (broken thumb) is expected to begin a rehab stint soon, but there is no timetable for his return.

Reds: The Mets come to town for a three-game set. Right-hander Taijuan Walker (6-2, 2.72 ERA) is the probable starter for the Mets against Reds rookie righty Hunter Greene (3-9, 5.72 ERA).