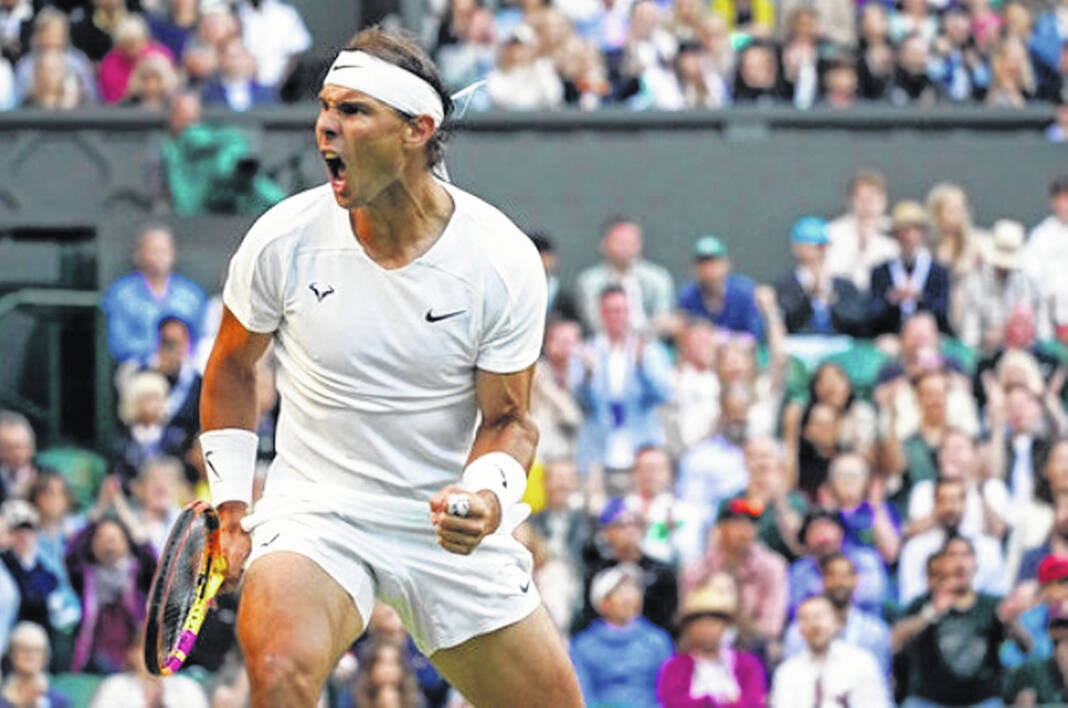 WIMBLEDON, England (AP) — Before being interviewed on Centre Court about his return to the Wimbledon quarterfinals, Nick Kyrgios traded in his all-white grass-court shoes for a red-and-white pair of basketball sneakers, and swapped out his white hat for a red one.

Big deal? Not to Kyrgios. Not to many, probably. Still, sure seemed to be to a reporter who peppered him with questions about it afterward.

That’s because the All England Club has a rather strict policy about all-white attire while players are on match courts during the tournament — which is clearly a nod to the earliest days of tennis, and some athletes think might have been better suited to the 1880s than the 2020s.

“I mean, I always want to wear all black, obviously,” Kyrgios, a 27-year-old Australian who faces Cristian Garin of Chile on Wednesday, responded when asked about the dress code during a pre-tournament news conference he attended in a black hoodie and matching cap.

“It would be cool to allow, like, a black headband or black sweatband. I think it would look cool,” Kyrgios said. “Obviously Wimbledon doesn’t really care what looks cool.”

Neither Kyrgios, nor anyone else, expects a change to the rules anytime soon. And there certainly are those who appreciate it as part of what they consider the charm of the oldest Grand Slam event in tennis.

“For me, what I love about Wimbledon is the tradition and that is what makes it so special, and having the all-white attire is one of the small traditions that I really embrace. It looks crisp, especially against the grass court,” said Alison Riske-Amritraj, who reached the third round as the 28th seed. “You don’t have to do it at any other tournament during the year. It’s very professional. I would wear white for every match, everywhere, so I’m probably biased when it comes to that.”

The first of the All England Club’s 10-point list of clothing guidelines states: “Competitors must be dressed in suitable tennis attire that is almost entirely white and this applies from the point at which the player enters the court surround.” The second stipulation: “White does not include off white or cream.” There are more details, too, such as that a color trim “around the neckline and around the cuff of the sleeves is acceptable but must be no wider” than 1 centimeter (less than half an inch), that “Caps (including the underbill), headbands, bandanas, wristbands and socks must be completely white except for” that same size allowance for trim, and this: “Shoes must be almost entirely white. Soles and laces must be completely white. Large manufacturers’ logos are not encouraged.”

That’s absolutely fine with some of the “competitors.”

Tommy Paul, who was seeded 30th and got to the fourth round, said that the Royal Palm Tennis Club in Pinecrest, Florida — where the head pro is Eric Hechtman, who has coached Serena Williams and Venus Williams — requires all white when he trains there.

“I don’t mind it at all. It’s kind of cool,” Paul said. “If I see guys doing it at home during practice, then I have no problem doing it for Wimbledon.”

One player in this year’s tournament said she always worries about getting her white outfit dirty while eating. Some say they were annoyed at needing to find new clothes to be able to play at Wimbledon. Others were excited about it.

Over the years, players have been chastised for violating the letter or spirit of the written rules.

In 2013, for example, none other than now-eight-time champion Roger Federer showed up with neon orange soles on his shoes for his first-round match, which he won — then was, um, reminded of Wimbledon’s rules by the club, so he switched to white soles before his second-round match, which he lost, his earliest Grand Slam exit in a decade.

In 2007, Tatiana Golovin played at Wimbledon with red underwear beneath her white dress, leading to this opening exchange at a news conference:

Reporter: “Can I ask you about your knickers?”

“Could it be maybe a little bit more up to date? Of course. We are in 2022,” said Jessica Pegula, who was seeded No. 8 this year and made it to the fourth round at the All England Club for the first time. “Then again, it’s two weeks out of the calendar where you have to do it. It’s part of what makes Wimbledon, Wimbledon.”