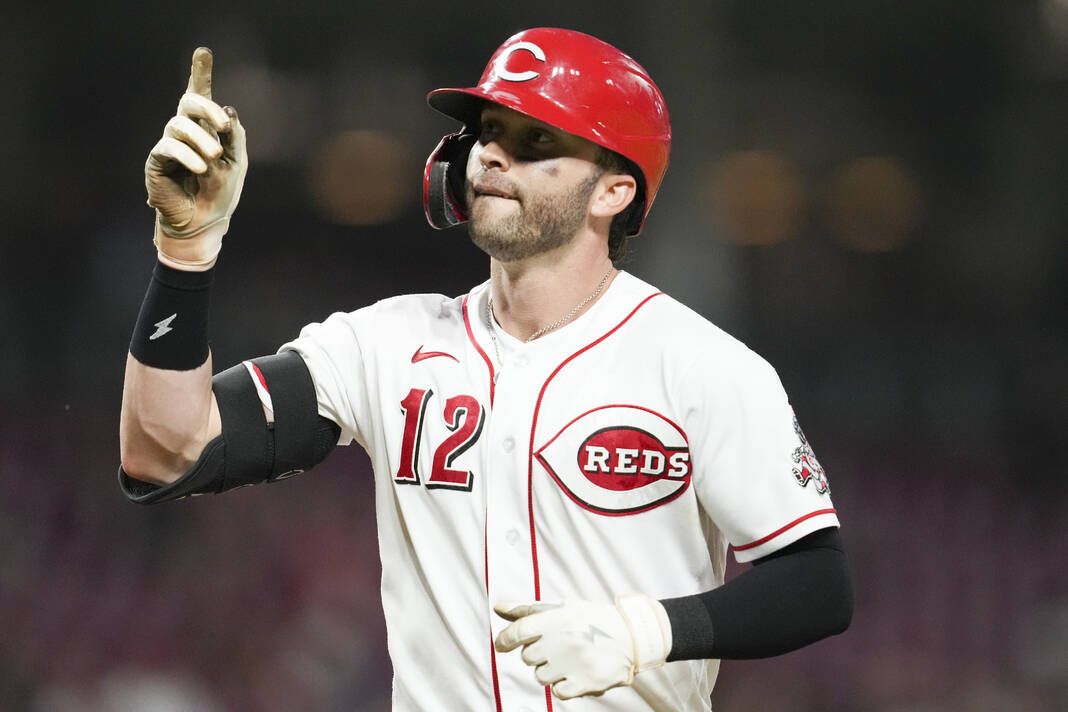 NEW YORK (AP) — With the trade deadline drawing closer, the first-place New York Mets have been busy getting better from the left side of the plate.

It was the second time in seven days the Mets traded for a left-handed hitter with some pop. New York upgraded at DH last week, acquiring Daniel Vogelbach from the Pittsburgh Pirates for rookie reliever Colin Holderman.

Naquin, a first-round draft pick 10 years ago, was batting .246 with seven homers and 33 RBIs in 56 games for the Reds, who are last in the NL Central. He homered and drove in two runs Thursday afternoon in a 7-6 loss to the Miami Marlins.

“Definitely wish him well in his career, and going to a first-place club — that’s great for him,” Reds vice president and general manager Nick Krall said.

Marte and Canha both bat right-handed. All-Star Jeff McNeil, a left-handed hitter, also plays left field occasionally when he’s not at second base.

The Mets view the 31-year-old Naquin as a good all-around player who can start a couple of times a week against right-handed pitching. They developed interest in him last month and talks intensified when the clubs began exchanging names a few days ago.

“We had several teams that had interest in Tyler, but this was what we felt was the best deal for him and we felt it added two quality players to our pipeline,” Krall said.

The Mets hold a three-game lead in the NL East over Atlanta heading into their series opener at Miami on Friday night.

Cincinnati also is expected to deal away All-Star righty Luis Castillo, perhaps the top starting pitcher on the trade market, and maybe others in the coming days.

“We’re working right now to figure out how we can do the best we can to build us for long term and sustainable success.”

Naquin has a $4,025,000 salary and is eligible for free agency after the season. His acquisition pushes New York’s luxury tax payroll above $290 million, the new fourth tax level named after free-spending Mets owner Steve Cohen.

Naquin was drafted 15th overall by Cleveland in 2012 and made his major league debut in 2016, finishing third in AL Rookie of the Year voting after posting an .886 OPS in 116 games.

Beset by injuries throughout his career, he signed with Cincinnati as a free agent in February 2021 and batted .270 last year with career highs of 19 homers, 70 RBIs and 127 games.

He entered Thursday a .269 career hitter with a .774 OPS in 507 games over seven seasons with Cleveland and Cincinnati. He had an .805 career OPS against right-handers, including an .811 mark this year.

The 18-year-old Rodriguez hit .356 with three homers and 16 RBIs in 26 games in the rookie-level complex league in Florida. He also appeared in two games with Class A St. Lucie this month, going 1 for 7 with a walk.

He can play all three outfield spots as well as second base and third. The Reds see Rodríguez as a center fielder, and will send him to their rookie-level complex league in Arizona.

“He’s a plus runner, has a chance to have a plus hit tool. We’re really excited about him,” Krall said.

The 19-year-old Acuña is 3-0 with a 2.67 ERA in eight minor league games this year, including five starts. He tossed three scoreless innings in his second start with St. Lucie on Tuesday, and is headed to Class A Daytona with the Reds.

“He’s pitched well, just got promoted to low A,” Krall said. “Has a chance to be a major league starting pitcher, frankly, with three plus major league pitches.”

Neither one was ranked among the Mets’ top 30 prospects by MLB Pipeline.

“We had conversations about some upper-level guys as well, but taking the upside with both these players, first with Hector Rodríguez, having a chance to be a center fielder, have a chance to have a quality hit tool that can run — you just don’t get those players at the upper levels. They become premium prospects for teams to trade,” Krall said.

“Acuna’s the same way. He added 3 mph to his fastball from last year to this year. And you can see him developing and growing. He’s just 19 years old, and he’s got a chance to be a legitimate major league starting pitcher. Those are harder to get as you climb up the levels and maybe you would have got one of those instead of both, but we felt it was the right thing for us in this organization to take a shot on two guys at the lower levels.”