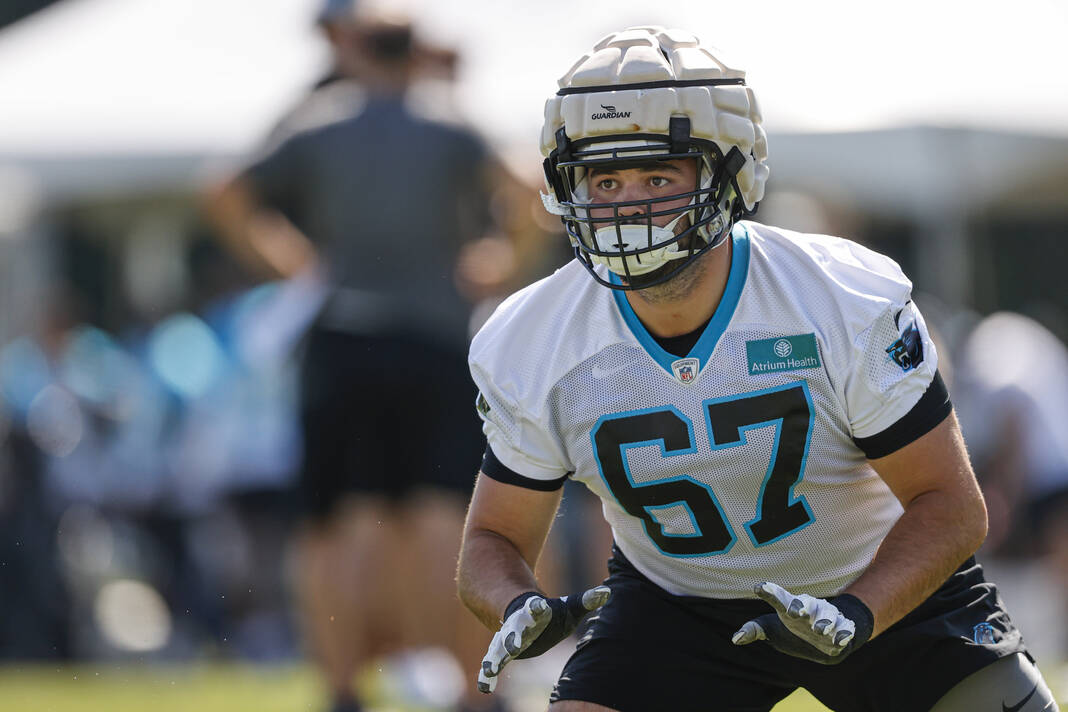 The mushroom-like contraptions NFL players are wearing on their helmets during training camp may look strange, but they’re a part of an ongoing safety experiment the league hopes will lead to a reduction in head injuries.

They’re called Guardian Caps, and they’re now mandatory for all 32 NFL teams through the second preseason game — the time when the league says head injuries are most prevalent.

“There’s a density of exposure, and a density of injury, at the beginning of training camp and the competition committee has been looking for ways to change that,” said Jeff Miller, executive vice president for NFL player health and safety.

The league said laboratory research indicates the 12-ounce Guardian Caps result in at least a 10% reduction in severity of impact to a player’s brain. It says that number climbs to at least 20% if both players involved in a collision are wearing them.

Miller said mitigating those forces “will have a cumulative effect for the betterment of health and safety of the player.”

Not everyone, however, is convinced Guardian Caps are the answer.

Chris Nowinski, co-founder and CEO of the Concussion Legacy Foundation, is “more than a little skeptical” that the extra padding helps prevent head injuries — and wonders if it could be doing more harm than good.

“Adding weight to a helmet can make things worse for the brain when it comes to rotational impacts,” said Nowinski, who previously served as a co-director of the Boston University Center for the Study of Traumatic Encephalopathy.

“Adding size to the helmet does the same thing. It’s very difficult to recreate this in a lab. We aren’t sure if this will be a net positive or a net negative.”

He questioned whether players are using their heads more now because the Guardian Caps soften the blow — something he believes could be an issue once the caps come off and actual games begin.

“Anyone who’s played football before knows that the first time you take those (caps) off or you hit with your helmet, or you have a collision, there’s a shock,” Saleh said. “If you’re waiting until the first game for that shock to happen, I think it’s … I don’t know. Time will tell.

“It’s just interesting with those Guardian Caps, and what exactly are we trying to accomplish?”

Oliver said the padded shells “aggravate” him, making him feel like “a bobblehead” on the field.

“It’s just heavy,” Oliver said. “I like the way my helmet feels without it. I have been playing without it for this long, I just don’t like it.”

Kelce showed up to an Eagles practice with extra bubble wrap on his helmet.

“They say the Guardian Caps add 20 percent protection,” Kelce quipped. “I figure the bubble wrap gave me another 2 or 3” percent.

Despite the skepticism, Miller said the feedback from most players has been positive — even if they feel the Guardian Caps look a little funny.

“I wouldn’t say they’re aesthetically pleasing, and I think we look a little goofy,” said Eagles tight end Dallas Goedert. “But they’re there for good reason. They did studies with them. Anything to keep us safer, why not do it?

“Obviously you only get one brain. May as well keep it as best you can.”

Added Tennessee Titans tackle Taylor Lewan: “Honestly, at first I was like, ‘What a stupid looking thing. This is the dumbest looking thing I’ve ever seen.’ But honestly, I’m not gonna lie, it’s kind of nice.”

Safety concerns about head injuries in the NFL has been on the rise for years.

Chronic Traumatic Encephalopathy, or CTE, has been found in the brains of more than 300 former players, according to the Concussion Legacy Foundation. Junior Seau, Andre Waters and Jovan Belcher are just some of the players who have died by suicide and later were determined to have the degenerative brain disease associated with repeated blows to the head.

The league announced in February there were 187 concussions during practice and games in 2021.

That’s one reason the NFL’s competition committee, given the data presented to them by lab researchers, mandated that offensive and defensive linemen, linebackers and tight ends — players who see the most head impacts during practice — wear the Guardian Caps this summer after five teams and about 100 players experimented with them last year at training camp.

He voluntarily wore his Guardian Cap in practice throughout the regular season and playoffs during the Los Angeles Rams’ Super Bowl run last year.

Pittsburgh Steelers coach Mike Tomlin, who is a member of the competition committee, told his players in a video released by the NFL that he is “morally obligated” to keep them safe and believes they’re useful.

And Indianapolis Colts coach Frank Reich agrees, saying the recommendation of the Guardian Caps was an “easy move.”

Defining the future of Guardian Caps is not so easy.

Miller said the next steps will largely depend on feedback they receive from players, as well as whether the data gathered from the use of the Guardian Caps shows a reduction in head injuries.

Washington Commanders coach Ron Rivera is already convinced; he believes Guardian Caps can be part of the norm in the NFL.

“I wouldn’t be surprised if at some point it’s going to be mandated through OTAs and minicamp,” said Rivera, a former linebacker with the Bears. “If this really helps reduce (head injuries), then I’d imagine we would continue” to use them.