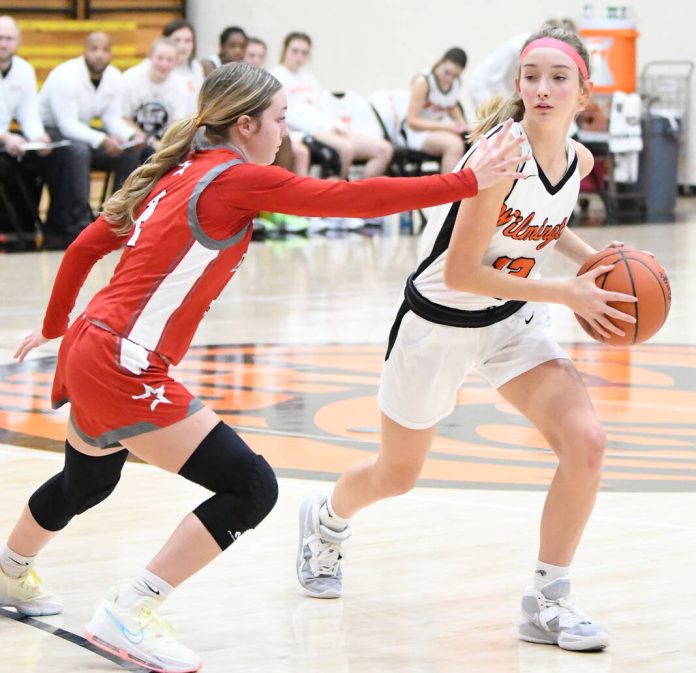 Wilmington breaks their three-game losing streak and gets a bump to 6-8 overall. They travel to Williamsburg for a Saturday matinee, in non-league action.

East Clinton’s seven-game winning streak is broken, which moves their record to 12-2 on the season. They will put their 6-0 National Division record on the line next Thursday when they host CNE at WHS. The Lady Astros won the first meeting, 56-19.

Trailing 22-11, Wilmington nullified a mostly poor first half with an 11-0 run in the final two minutes to tie the game at 22 after two quarters. Katie Murphy scored 12 in the half, with eight coming in the second quarter.

“They made a run right before the half, we were up 22-11, and I felt like they gained momentum. We battled back and forth through the second half and we missed a lot of shots that we’ve been making. I give Zach [Williams] and Wilmington some credit, part of that is probably their defense,” said EC head coach Bill Bean.

Caroline Diels sunk a long two-point jump shot early in the fourth to give the Hurricane a 34-33 lead, their first of the night.

Wilmington’s Murphy scored 10 of her 25 in the fourth quarter, including a back-and-forth with East Clinton’s Megan Tong (12 points) where both players drained respective shots from deep, sending the gym into a frenzy. The collective 12-point outburst put the score at 40-39 with less than four minutes to play.

“Katie finished very strong in the paint tonight. She got some threes going, I mean, she was getting frustrated there and I just told her to keep shooting, snap and follow through, and she came through … so happy for her,” WHS head coach Zach Williams said, sopping wet from head to toe after an emphatic locker room celebration.

Sporadic free throws and a 90-second possession from the ‘Cane gave them a 46-39 lead with one minute remaining. EC’s Jayden Murphy — she finished with 11 — sunk a three to bring the Astros within four, but a singular free throw from Aidynne Tippett and a Diels steal and subsequent layup sealed the game for the Hurricane. Tippett finished with eight, Diels with nine.

Williams continued, “We didn’t turn the ball over as much, we hit our free throws tonight. We hit some big shots. Some girls stepped up. I told them in there that was one of the funnest [sic] games I have been involved in, in a long time. Just the energy and enthusiasm from the bench to the stands, both teams going back and forth and battling. That’s a great team.”

Libby Evanshine, averaging roughly 17 points on the season, was held to 12 by a disciplined defensive outing from Murphy and the WHS bigs. Evanshine went for a double-double, pulling down 10 rebounds.

“It’s a county rivalry, of course you want to win … I told them you ought to feel bad, you just lost one that we probably shouldn’t have. But, they out played us tonight, give them credit. We’re still 6-0 in the league, and have a good shot to win our league. It’s really not going to hurt us as far as a tournament draw. You have to come back tomorrow ready to go and get back after that league chase,” Bean said.