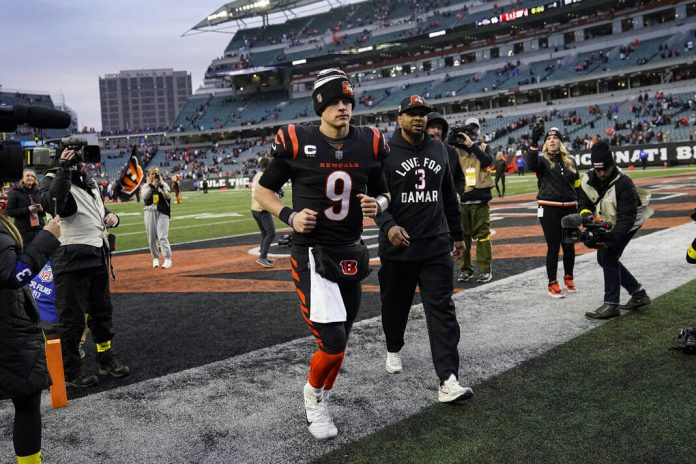 CINCINNATI (AP) — The Bengals and Ravens play for the second consecutive week — and third time this season — on Sunday night in a wild-card playoff game.

The AFC North rivals know each other pretty well by now.

But it’s the playoffs, so there’s bound to be some surprises and extra intensity when the teams meet again in Cincinnati on Sunday night.

Baltimore is especially motivated after going 8-9 last season and missing the playoffs for the first time in four seasons, then watching the Bengals make a Super Bowl run.

“There is a hunger, for sure,” Ravens tight end Mark Andrews said. “This team has been through a lot.”

Baltimore (10-7) will look a little different this week than last.

With a wild-card berth already secured, the Ravens rested some key players last week, including running back J.K. Dobbins, Andrews and others. The Bengals won 27-16, splitting the season series.

With quarterback Lamar Jackson out with a knee injury and backup Tyler Huntley dealing with a sore shoulder, rookie Anthony Brown got his first NFL start. He threw for 286 yards but was intercepted twice and fumbled in his own end zone resulting in a Cincinnati touchdown.

It’s not clear whether Huntley will be ready to go or if Brown will get another start on Sunday night. The Ravens are 2-3 without Jackson, who hasn’t practiced since he hurt his knee Dec. 4.

“There’s so much trust in both of them, and that’s with everybody on the team,” Andrews said. “Whoever it may be, we’re going to be alright.”

Either way, Baltimore will lean on a refreshed Dobbins, who since returning from a knee injury in Week 14 has rushed for 397 yards, including 13 runs of 10 or more yards.

The Bengals (12-4) have their own issues. Right guard Alex Cappa will miss the game after hurting his ankle last week. That came after the Bengals lost right tackle La’el Collins to a knee injury in the Dec. 24 win over the Patriots.

The right side of a retooled Bengals line that had been so good throughout an eight-game win streak will start two backups, tackle Hakeem Adeniji and guard Max Scharping.

If the postgame discussion about cheap shots last week is any indication, emotions could be heated.

Burrow’s flat second half last week notwithstanding, Cincinnati offensive coordinator Brian Callahan marveled at the third-year quarterback’s ability to do whatever is needed to win.

“He’s delivered in big moments on big stages and given every opportunity to do it, he’s tended to do it,” Callahan said. “You feel good about that, but his personality is one where he doesn’t ever shrink in the moment. Everything he ever does is going to be standing and deliver when it’s required of him to be that player. I don’t know what makes him like that.”

Ravens coach John Harbaugh has won an NFL-record eight road playoff games, and the team’s past five postseason victories were all away from home.

Baltimore is 6-0 on the road in wild-card games.

The Ravens gave linebacker Roquan Smith a five-year contract extension this week after he helped transform the defense into one of the league’s top units. In the nine games since Smith arrived in a trade from Chicago, Baltimore has allowed only 14.7 points per game.

Smith and Queen have formed a nice tandem in the middle of the Baltimore defense.

“I think we’ve just grown into each other,” Queen said. “It’s not like really something that you can just look at and tell, it’s just a feel of being on the field and just playing better.”

Bengals receiver Ja’Marr Chase’s 86 receiving yards against the Ravens put him up over 1,000 in his second NFL season. Chase has 1,046, and Tee Higgins is right behind him with 1,029. The numbers are even more impressive considering Chase missed four games with a hairline hip fracture, and Higgins was limited by a hamstring injury. Tyler Boyd had 762 receiving yards, and the three have combined for 21 touchdowns.