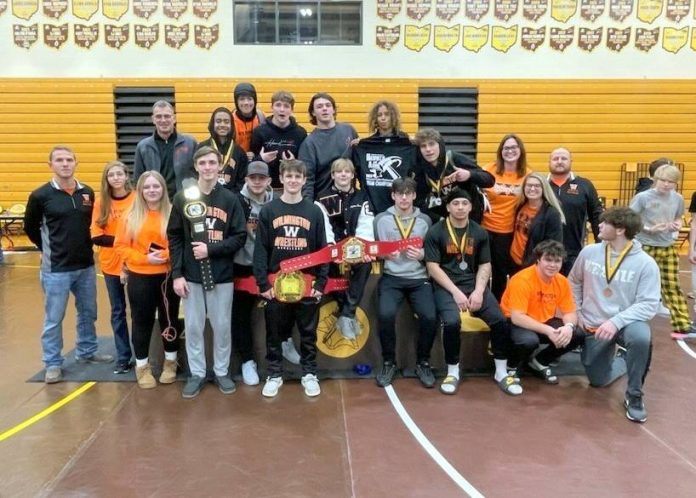 “We would really like to thank all of the parents, alumni and fans that attended,” WHS coach Kelly Tolliver said. “It motivated the team and it was great to share the win with them.”

The tournament ended with the 285-pound match with Darrick Perdue in the title match. In just his second varsity appearance, Perdue blitzed the heavyweight field with a trio of first-period pins and a default victory en route to the final bout.

Against No. 1 seed Jamell Smith of Xenia, Perdue was in total control, Tolliver said, when Perdue suffered an elbow injury and could not continue.

“It was the last match of the evening and a bittersweet win in the end for the team, as we had already clinched the championship,” said Tolliver. “Darrick was at mat side rooting his team on all the way through the tournament. He and the seniors I felt stepped up a bit more this week and pushed themselves in practice and raised expectations among our younger guys to push the boundaries.”

Clinton-Massie finished 10th in the tournament. Cole Moorman was the lone Clinton-Massie champion. In the 126-pound championship match, Moorman pinned Noah Allen of Northmont in 4:51.

Carson Hibbs and McCoy won back to back titles for the Hurricane. Hibbs decisioned Corbyn Cunningham of Western Brown 9-2 in the 132-pound championship.

McCoy pinned four opponents on his way to the 138-pound championship. In the finals, McCoy was a 5-3 winner over Tuckey Campbell of Franklin.

“The (coaching) staff really tried to concentrate on our lower weight classes after Bellbrook to tighten up some of our offense on our feet as well as down on the mat,” Tolliver said. “We did see dividends at the opening of the tournament with a string of victories from those weight classes. Even though not all placed, those weight classes not only contributed to the ultimate team victory but also got the team fired up as a whole. From Zo Woody at 106 to Thane McCoy at 138 we started the tournament with a string of wins.”

Wilmington returns to the mat Jan. 26 at Miami Trace.