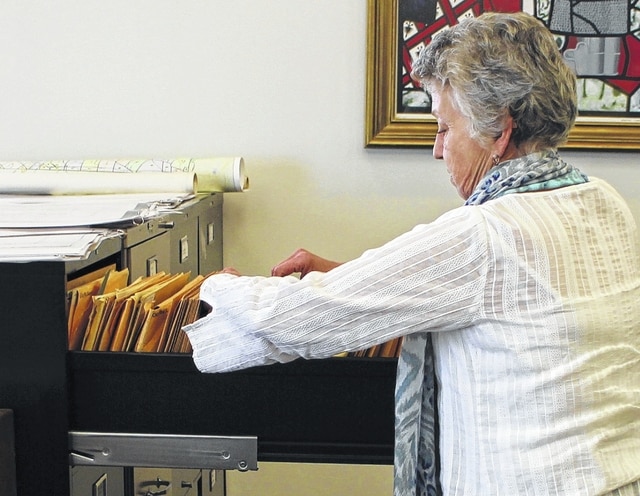 This undated photo shows East Main Street from near the Clinton County Court House. To the right, what appears to be a service station can be seen, with its sign reading “B.F. Goodrich.”

Workers attempting to install fiber optic cables on Walnut Street accidentally struck what officials believe to be an underground tank.

Kay Fisher, director and curator of the Clinton County History Center, searches for records of the service station that used to be at the corner of Walnut Street and East Main Street.

WILMINGTON – The parking lot for the Wilmington United Methodist Church was once the site of a gas station.

Crews installing fiber optic cables near the Clinton County Prosecutor’s Office last Friday had that inkling when they struck what authorities believe to be an underground tank on Walnut Street.

Authorities shut down the street, and the Ohio Environmental Protection Agency was informed.

Lt. Brant Schmitt with the Wilmington Fire Department told the News Journal at the time that the area would have to be excavated, the tank removed and the soil cleaned.

As of Thursday afternoon, Schmitt said he hasn’t heard any developments.

The News Journal checked with Kay Fisher, director and curator of the Clinton County History Center, to find out why there was an underground tank in the area.

An undated photo on file at the history center shows an unnamed gas station on that corner with a sign reading “B.F. Goodrich,” a tire brand still being sold today.

Based on the time period of the vehicles in the photo, Fisher referenced phone books from the 1940s, 1950s and 1960s.

According to a local phone directory dated 1949, Holmes & Osborne was listed as a service station at 75 E. Main St. next to what used to be The Lamax Theater, which was listed at 69 E. Main St.

Fisher said around that time there was a farm equipment store further up Main Street owned by a man named Osborne.

As late as 1957, the same location was listed in phone books as Clinton Oil Co.

Fisher said she wasn’t sure when the station was torn down.

If you have any further information, memories or photos from that time, let us know by calling the News Journal at 937-382-2574.