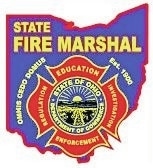 COLUMBUS — This Independence Day, the several state organizations and officials remind Ohioans about fireworks safety for the sake of themselves, those around them, and the state.

“Firecrackers and sparklers cause the most injuries,” said State Fire Marshal Larry Flowers. “Severe burns, injuries to the hands, eyes and face, and even blindness or hearing loss can happen anytime something is burned. For example, legal sparklers burn at up to 1,800 (degrees Fahrenheit), hot enough to melt gold.”

Flowers was joined recently by the Ohio Affiliate of Prevent Blindness, Child Injury Prevention Alliance and the Ohio Eye Care Coalition in an effort to education Ohioans about the dangers of backyard fireworks.

Puncture-type injuries to eyes are also common, and the U.S. Consumer Product Safety Commission reported 10,500 injuries treated in emergency rooms due to injuries related to fireworks. Two-thirds of injuries occur within a month of Independence Day.

“Prevent Blindness supports a total ban on backyard fireworks, including sparklers, which are widely available at grocery and department stores,” said Sherry Williams, president and CEO of The Ohio Affiliate of Prevent Blindness. “Last year, 1,400 serious injuries occurred due to the use of sparklers and for children under 5 years old they were responsible for nearly 67 percent of the injuries.”

Hands, fingers, eyes and parts of the head are most likely to be injured.

“The words that I hear when parents bring their child crying in pain to the emergency department after a firework injury are always the same: ‘Doctor, I can’t believe that this happened to my child. I was standing right there, but it happened so fast that I could not do anything in time to stop it from happening,’” said Dr. Gary Smith, president of Child Injury Prevention Alliance. “Do not make that mistake with your family.”

In addition to injuries and the risk of fire, criminal charges can be filed, too.

There are three types of fireworks in Ohio, all of which are hazardous: Trick and novelty items such as sparklers and snakes that can be legally sold and used by anyone; exhibitor fireworks which require a license to sell, purchase and use; and consumer class fireworks such as bottle rockets and roman candles, which require a license to sell. Consumer fireworks can be purchased by anyone over the age of 18, but must be removed from the state within a certain timeframe and cannot be legally discharged in Ohio.

Aerial shells fired from mortars can only be legally discharged by licensed exhibitors, according to Flowers’ newsletter.

“The Division of State Fire Marshal encourages all Ohioans to attend public fireworks displays. These displays are hosted by local municipalities and licensed exhibitors,” said Chief Frank Conway, Fire Prevention Bureau. “Besides being safer and legal, professional fireworks displays are better than any exhibit that could be produced with consumer fireworks.”