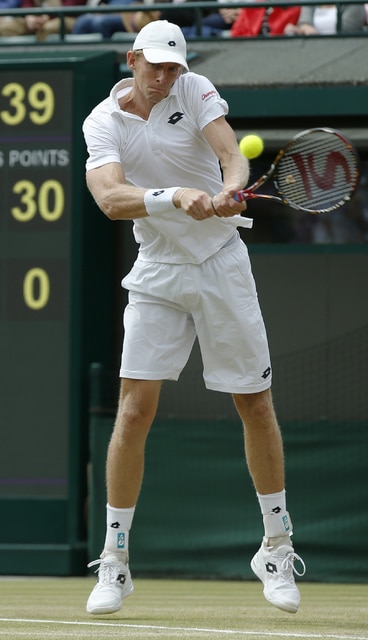 Novak Djokovic of Serbia returns a ball to Kevin Anderson of South Africa during their singles match against at the All England Lawn Tennis Championships in Wimbledon, London, Tuesday July 7, 2015. (AP Photo/Alastair Grant)

Novak Djokovic of Serbia celebrates winning a point against Kevin Anderson of South Africa during their singles match against at the All England Lawn Tennis Championships in Wimbledon, London, Tuesday July 7, 2015. (AP Photo/Alastair Grant)

Kevin Anderson of South Africa returns a ball to Novak Djokovic of Serbia during their singles match against at the All England Lawn Tennis Championships in Wimbledon, London, Tuesday July 7, 2015. (AP Photo/Alastair Grant)

He thinks his latest carried-over contest won’t have any effect on him in the Wimbledon quarterfinals Wednesday.

The defending champion and No. 1 seed at the All England Club will be competing for a third day in a row when he faces No. 9 Marin Cilic for a berth in the semifinals.

That’s because Djokovic’s 6-7 (6), 6-7 (6), 6-1, 6-4, 7-5 victory over No. 14 Kevin Anderson began on Monday, was suspended because of darkness after four sets, and then resumed Tuesday. The good news for Djokovic is he only needed about 45 minutes to wrap things up, and his match against Cilic is scheduled for second on Centre Court on Wednesday, leaving extra time to rest.

“I wouldn’t call it a workout,” Djokovic said of his final set against Anderson. “It was good that I played another hour on the match court but it was far, far more difficult than just a simple workout.”

At the French Open last month, Djokovic’s semifinal against Andy Murray also stretched over two days, and the Serb then lost in the final to Stan Wawrinka.

“It’s just how your body reacts and how it recovers,” said Djokovic, who hadn’t dropped a set this fortnight until facing Anderson. “I think I’m going to be fine. … I think I haven’t spent too much energy throughout this tournament. Of course, this match was by far the toughest I had so far. Let’s see. I’m confident I can feel good.”

He owns a 12-0 record against Cilic, the reigning U.S. Open champion. That includes a five-set victory in the Wimbledon quarterfinals a year ago.

“I’m going to have to be more aggressive, to play more risky tennis,” Cilic said. “Of course, that leaves less margins for error, but that’s the way I was playing last year.”

The other men’s quarterfinals are No. 2 Roger Federer against No. 12 Gilles Simon of France, No. 3 Murray against unseeded Vasek Pospisil of Canada, and No. 4 Wawrinka against No. 21 Richard Gasquet of France.

Federer has won Wimbledon seven times, Djokovic twice, and Murray once. Of the five other remaining men, only one — Gasquet, in 2007 — has even made it to the semifinals at the All England Club.

Here’s what to look for Wednesday at Wimbledon:

Federer leads the series 5-2, and their Grand Slam achievements are even more lopsided: Federer owns 17 major titles; Simon is playing in his second career major quarterfinal. Simon’s take on running into Federer? “It can be sometimes difficult to face him,” he said.

A winner in all three previous meetings against the 56th-ranked Pospisil, Murray also will enjoy a home-court advantage at Centre Court, of course. And while Murray, whose 2013 title was the first for a British man at Wimbledon in 77 years, will be trying for his 17th Grand Slam semifinal, Pospisil had never been past the third round at a major until now.

They’ve split their two past matches, and although Wawrinka owns two major titles to Gasquet’s zero, it’s Gasquet who is the only one to have made it to the final four at Wimbledon.