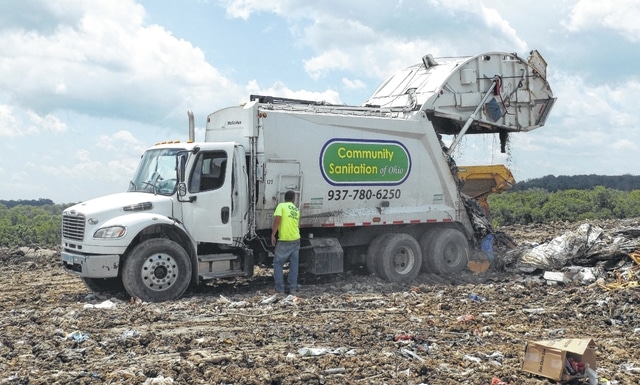 Braden Dunham, superintendent of Wilmington’s sanitation department and landfill, submitted a report suggesting the use of one-manned automated trucks, trash can and truck advertising, expanding collection territories to nearby villages and communities, mulching and selling its own compost, and creating a recycling sort center to generate revenue from recycling collections.

“They talked about selling the landfill at many points in time,” Dunham said. “They talked about leasing it out to a company. And then now they pretty much discarded all of that due to the business plans and the things that we’re aiming towards that will let us keep running it as an enterprise facility for the city, keep it as a city service, keep it small, keep it manageable and provide a good service for the residents.”

Also being considered are better enforcement of already existing fees, like fees for not using a tarp when hauling trash. A $1 monthly fee for compost collection and a $2 recycling fee have been suggested too, reportedly to combat the costs of those services.

The tarp fee, $10, will begin in August. Not securing loads of garbage is also a criminal misdemeanor, according to Ohio law.

“We have to justifiably make it feasible for the department,” Dunham said. “We are a small operation, but we can be a very effective small operation.”

Wilmington Mayor Randy Riley stressed that Dunham’s report includes “ideas” rather than “recommendations” and said creating as many ideas as possible and being public about them are important to him.

“The sad thing is, there are a lot of citizens, there’s a lot of people out there, that as soon as you start talking about taxes (or fees), they get angry,” Riley said. “Well, you should be angry if we don’t look at every possibility.

At the landfill, Dunham said workers have been working to conserve air space. They ensure trash is compacted, use a giant tarp to cover the landfill when possible as an alternative to about six inches of dirt and have changed working habits to ensure compliance with the EPA is maintained.

“By using the landfill cover, it eliminates high volumes of soil to be used every day,” said Dunham. “That practice saves the city lots of money and air space and life in the landfill. … That’s what we sell here at the landfill is air space.”

In addition to streamlining landfill practices, Dunham suggested a recycling sort center to once again generate revenue from recycling.

Dunham said the city used to make money from its recycling until Abitibi, the company that collected it, was purchased. The new company said the volume of recycled material, coupled with the fact that it wasn’t separated, didn’t generate revenue and Wilmington would have to pay for it to be removed.

By sorting recycled materials, they can sell it to the highest bidder by sorting it itself.

“By doing this, eventually if we do put a sort center in, we’ll be able to broker the material ourselves, sell to the highest bidder and maybe make a little return on the products,” Dunham said. “As it is now, we provide recycling, and it costs us a lot of money” even though it diverts 288 tons of materials from the landfill.

Dunham said employees and those doing community service could be used to sort the materials, keeping costs low.

Alternatively, the city could require citizens to separate their recycling into three different bins, which Dunham mentioned as a possibility in his report.

Dunham said automated trucks, ones with mechanical arms to pick up standardized trash bins, which would be provided by the city of Wilmington, could reduce the number of people working on a truck from three to one. Those people could then be used for other tasks or allow the city to reduce manpower, perhaps by attrition.

“Instead of having rear-load garbage trucks out there picking up waste with three guys per truck, we’re talking about making the residential routes automated,” Dunham said. “That reduces fatigue and injuries and safety issues out on the routes.”

Additionally, Riley said the freed up manpower could be used to pursue another of Dunham’s suggestions – offering collections in other areas, for instance Blanchester and New Vienna or Country Manor.

But, it wouldn’t be worth it if the city were only going to remain in the business of owning a landfill for seven more years, the expected life of the landfill’s current cell.

Since an expansion would take several years, the process must begin soon, according to Larry Reinsmith, Wilmington’s service director. And the current cell would have to be capped, which Riley said would cost $3 million.

“You can’t just meet your expenses, you have to exceed your expenses,” Riley said. “Because you know down the road there is a big expense hiding in the bushes.”

Still, Dunham and Riley may differ lightheartedly on the inevitable future of the current landfill cell.

“My goal is that at some point in the future that becomes the sled riding hill in Clinton County,” after it’s capped and grass grows over it, Riley said.

Dunham, on the other hand, told the Wilmington News Journal he wanted to see if harvesting methane from the landfill could be used to generate energy for city buildings and pass further savings onto the city.