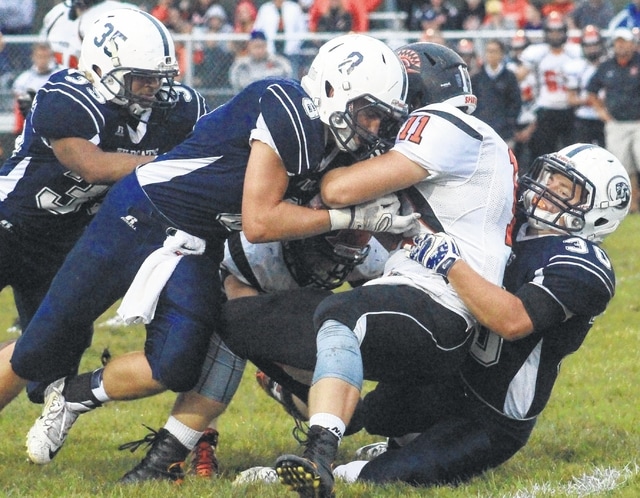 BLANCHESTER — Two critical Blanchester turnovers were the difference Friday night as the Wildcats lost to Waynesville 28-20 at Barbour Memorial Field.

The first came with 3:27 left in the second quarter. Jared Monhollen’s pitch ended up as a fumble. J.R. Miller scooped it up and rumbled 45 yards for a Spartan touchdown. The two-point conversion made it 14-all.

Blanchester then got a bit of fortune, as a Logan Bloom pass was picked off by Branson Campbell and returned 34 yards to the Waynesville 33.

Monhollen marched the Wildcats to the Waynesville 10. However, some clock mismanagement led to Blanchester having first and goal from the five with just 10.9 left. Monhollen was picked off by Isaiah Bauer as the half ended.

“When you want to get right down to it, there were two plays,” said BHS head coach Jack O’Rourke. “The interception before halftime and the scoop up for a touchdown. If we don’t make those two turnovers, we’re up by a touchdown at the end of the ballgame.

“We’ve got to do a better job in those crucial situations taking care of the ball.”

Nick Grogg would help the Wildcats recapture the lead early in the third.

After a Waynesville three-and-out, Grogg returned the ensuing punt 59 yards to the Spartan 16. On second and 10, it appeared Bauer had picked off Monhollen again in the end zone, but Grogg wrestled it away for the touchdown. The conversion was missed, but Blan led 20-14.

Waynesville took the lead for good with 3:34 left in the third. After starting from its own 10, the Spartans went on a seven-play, 90-yard drive that ended with a Bloom three-yard run. The Cameron Anderson made it 21-20 Waynesville.

Blanchester (0-3) drove to the Waynesville 33 before a sack and three incompletions turned the ball over on downs with 1:40 left in the third.

It would take the Spartans just five plays to capitalize. After a 35-yard pass from Bloom to Bauer, he found Elijah Bennett three plays later for a seven-yard touchdown. It was 28-20 Spartans with 33 seconds left in the third.

Blanchester would run just one more play from Waynesville territory the rest of the way, as the Spartan defense pinned its collective ears back and rushed Monhollen. He was sacked three times and was just 2 of 7 throwing the rest of the way.

“We got behind the eight-ball, and they’re bringing everybody in the whole blue moon (with Blanchester) trying to throw the football,” said O’Rourke. “

O’Rourke was proud of the way his defense played and the way they worked to try to battle back at the end.

“Our kids played their hearts out,” O’Rourke said. “They did a great job on defense against the run. They played the whole four quarters and I’m proud of that aspect.

“However, for us to beat a good football team, we can’t do what we did (in this game).”