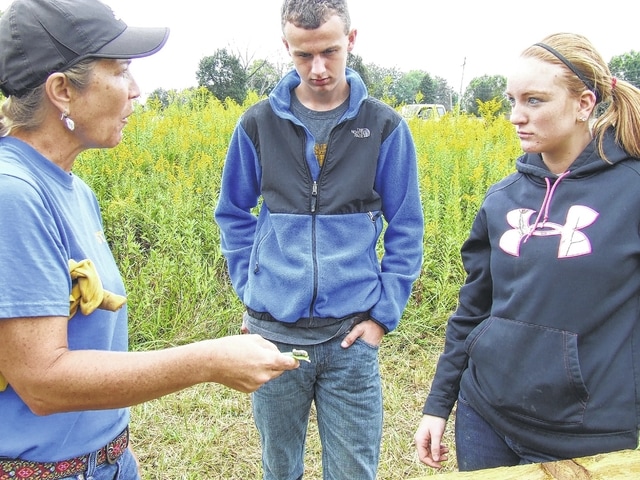 WILMINGTON — Students in the Wilmington High School FFA helped install a split-rail fence at the Stuckey Farm Park on the city’s west end.

The addition of the traditional style fencing is the first service project at the old pasture by the local chapter in what’s planned to be an ongoing partnership between the FFA and Wilmington Parks & Recreation.

“It’s a great community project to work on,” said Kacy Younker, FFA member at WHS. “It’s great for the chapter, too.”

“It’s great for the chapter. We have a goal to earn a gold chapter rating,” he said.

Wilmington Parks & Recreation Director Lori Kersey Williams is pleased with the natural-looking fence improvement to the Stuckey Farm Park on U.S. 22 West. She wants to try to establish a monarch habitat there by planting milkweed, without which monarch butterflies cannot survive.

She was excited to find a caterpillar Saturday morning during the fence-building project.

The Wilmington High School FFA advisor and vocational agriculture teacher, Doug Rinehart, said the project was especially meaningful to him. He helped farmed there when he was younger, and recalled the site was used for hay and for grazing cattle.

“I think that Roy’s smiling on what we’re doing,” he said Saturday. “It’s just an honor to be part of it.”

Among the ideas for possible future FFA projects at the Stuckey Farm Park, said Rinehart, are test planting plots and transforming a tractor into a children’s slide.

Of the FFA chapter, Rinehart said, “We’re all about pride, tradition and community. These are great kids to have.”