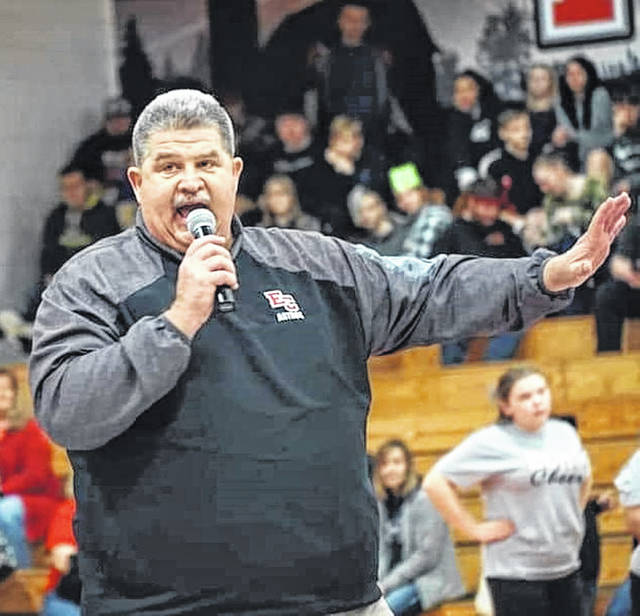 LEES CREEK — “Hey, brother, what are you doing here?”

“They were Astros and they were close.”

Those were some of the recollections and thoughts of the reunion for Jeff Craycraft and Jim Marsh in heaven.

“I’m still in shock over it really. It’s hard to believe we lost him and what we went through at the very end of October losing Jeff, so it’s just hard to put anything into words, to tell you the truth,” said Bill Bean, a former EC director of athletics and current girls basketball coach. “Jim was good to the kids and did a lot for the kids. He knew sports were important; they’ll miss that.”

EC Principal Michael Adams, who announced the news of Marsh’s death and asked for a moment of silence before the Astros’ boys game versus Fayetteville-Perry Saturday, remembers Marsh as a champion for all things East Clinton.

“Jim was always here for the students. He was always proud of our students,” Adams said.

“One of the recent memories was presenting at a board meeting what our students’ GPAs were and the pride he had for their grades and academics. He really stressed that academic honor piece. Any time you would hear him talk about our students, it was to the moon and back. It was always very positive. He was proud to represent East Clinton in any way he could.”

“Whether that was addressing the board or a vote at league meetings, he was voting for what was best for his athletes and his students. He probably was the biggest cheerleader, besides a parent, these kids had. Nobody spent more time in this building over the last nine or 10 years than he has.

“Mr. Marsh will leave a legacy,” Magee posted in a tribute to Marsh on the district’ Facebook page Saturday. “He has impacted the lives of many students and student-athletes. As a coach, he stressed life lessons. I heard him deliver several lessons on facing adversity as many of our athletes have had to deal with tough issues over the last many years.

“Today, Astro Nation and beyond, we mourn the loss of Jim Marsh. As we remember and celebrate his impact, be intentional about your mindset and your approach to life.”

For EC football coach Steve Olds and EC boys basketball coach Phil Shori, they are appreciative of the opportunity to be head coaches Marsh helped give them, and then being there to lend advice.

“I’m grateful. Mr. Marsh was one of my biggest supporters. He gave me my first chance to be a head coach. He was supportive from the get-go,” Olds said. “Just being able to go down to his office, to get advice, to just be available, we’ll miss that.

“He was just a great guy. For as long as I’ve known him, it’s always been ‘whatever we have to do to make sure the kids have what they need.’ He’ll be missed around here.”

Shori said from the first interview for his job he always had the feeling that Marsh always believed in him.

“When I first took this job, I didn’t know if I was ready for it,” Shori said of his first head coaching stint. “I was 23. It was just his belief in me that made me think, ‘You know what? I can do this.’ He showed he believed in me.

“I’m going to miss him. He was a great mentor. He was awesome.”

They were reunited when Weber was the boys basketball coach at East Clinton after Marsh, a 1981 graduate of Hillsboro High School, took over as director of athletics.

“That man mentored me. He was one of the kindest men. We spent a lot of time discussing life, players, things that you don’t think a coach and athletic director would talk about,” Weber said. “He’s going to be greatly missed.”