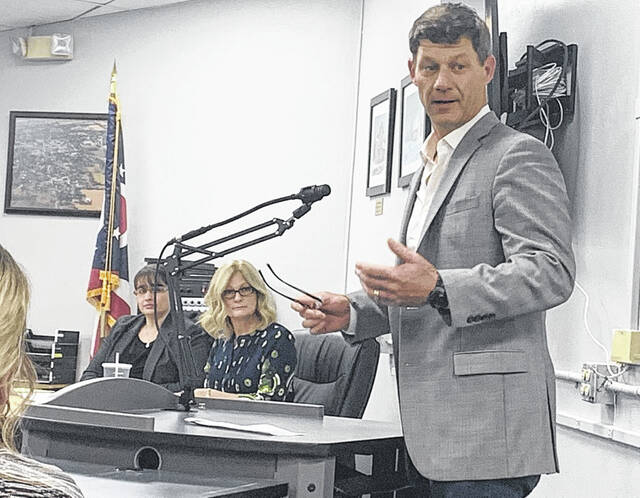 BLANCHESTER — Solar energy, a new county government building, and high-speed internet access were among the topics the Clinton County commissioners brought when they came to Blanchester.

At Thursday’s Blanchester Village Council meeting, the commissioners shared updates on three projects involving energy, broadband internet, and the acquisition of what will become a new county facility.

Commissioner Kerry R. Steed spoke to the council and attendees about a project to help make broadband internet available to everyone in the county.

“To do real work at home with your kids or do a business, what do you really need to have? You need to have internet connectivity on a scale much greater than what we are provided in many of our rural areas,” said Steed.

According to Steed, there are only 15,000 people in the county living in places where high-speed internet is available for use. Steed, along with the other commissioners, agrees that there needs to be better service to rural residents.

He advised the commissioners have been working with a consulting company called Ice Miller to form a plan to upgrade the broadband access for the area.

He said this puts them ahead of the game because every area is trying to improve the internet services for their community.

He said it’s not going to happen “overnight” but it would be an 18- to 36-month loadout.

Commissioner Mike McCarty spoke to the council about the solar project they’re working on. McCarty told the council that commissioners were contacted by the Ohio Power Siting Board, a group “designed to administer and regulate utility- scale projects,” McCarty advised. Specifically, targeting gas, nuclear, and coal-fired plants in the hopes of lessening the ecological footprint of man.

He advised a company contacted the commissioners over a year ago and started working on the idea of building a utility solar plant in Jefferson and Washington Townships.

He advised they’ve been in a tough spot since there have been pro- and anti-solar people in the county. Some were against it due to what it might do to the landscape.

“We’re trying to be transparent as we go through this with the public and keep them informed,” said McCarty. “A lot of people’s frustration is that any other type of energy that comes into a zoned area goes through a lot of county guidance and oversight to make sure it fits our local zoning is being met. When it’s a Power Siting Board project in the past, it bypasses a lot of local controls. That’s caused a lot of frustration.”

He noted that’s changed due to Ohio Senate Bill 52 passing which gives more local authority for projects that are 50 megawatts or higher.

He advised the council that he’s sensed more negative reactions to the project mostly from landowners.

Commissioner Brenda K. Woods informed the council and attendees that the former Southern State Community College campus on Davids Drive in Wilmington is now owned by the county. Woods advised that non-court related offices and departments in the Clinton County Courthouse, along with the Bureau of Motor Vehicles offices, would be moving into that building.