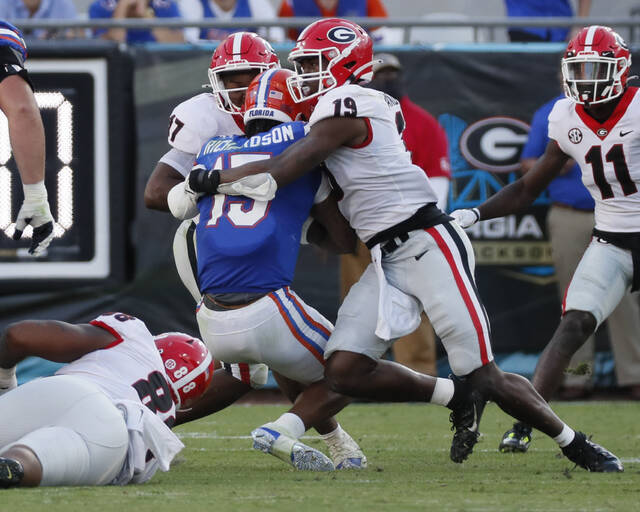 Never in the seven-year history of the College Football Playoff has the selection committee’s first top four exactly matched that of the AP Top 25 that directly preceded it.

The latest Associated Press college football poll presented by Regions Bank makes it highly unlikely this year will be the first.

Georgia remained No. 1 in the AP Top 25 on Sunday and looks like a lock to be first in the committee’s rankings Tuesday night.

Cincinnati stayed at No. 2 on Sunday in the media poll and the chances of the CFP rankings going in that direction and pretty much zero. The selection committee has never ranked a team from the Group of Five higher than No. 7 in any of its rankings.

Cincinnati started seventh last year and then proceeded to be passed in subsequent rankings, finishing eighth.

AP voters have generally treated G5 teams better than the selection committee, especially the highest ranked team from outside the Power Five. For example, last year Cincinnati moved up to sixth in the AP poll during the final few weeks of the regular season while the Bearcats were dropping — while remaining unbeaten — in the CFP rankings.

The rest of the AP’s top four this week was Alabama at No. 3 and Oklahoma fourth. Michigan State moved up to No. 5.

Twice in the last three seasons has the CFP’s first rankings had the same four teams as the preceding AP poll, but with Nos. 3 and 4 flipped.

Ranking the teams after Georgia is getting tougher every week for AP voters. Reality check has some quibbles, but is sympathetic to the challenge.

Next: vs. Missouri, Saturday

Reality check: Two straight performances where the Bearcats failed to hammer a 20-plus point underdog was not ideal leading into the first CFP rankings.

Reality check: Crimson Tide allowed 244 yards rushing to Florida but no more than 94 in any other games. Notable considering Alabama’s toughest remaining opponents (Arkansas, Auburn and likely Georgia) all rank in the top six in the SEC in rushing.

Reality check: QB Caleb Williams has 14 touchdown passes and is averaging 11.1 yards per attempt in three and a half games since taking over for Spencer Rattler.

Reality check: Kenneth Walker III is a worthy Heisman contender as the nation’s leading rusher on an unbeaten team, but he has had an interesting season. Three huge games of 197 yards rushing or more and a couple when he has been bottled up (145 on 42 carries) in close wins over Indiana and Nebraska.

Reality check: Buckeyes’ pass defense is boom or bust. Ohio State averages 3.5 sacks per game (sixth in the nation) with DE Zach Harrison leading the way and it has 10 interceptions. Without the pressure, there is a lot of room from receivers to operate.

Next: at Washington, Saturday.

Reality check: The Ducks could use a second running back to emerge was a complement to Travis Dye with C.J. Verdell out for the season. Freshman Byron Cardwell broke out against Colorado (seven rushes for 127 yards), but will that carryover to the non-blowouts?

Next: vs, Indiana, Saturday.

Reality check: Cade McNamara and the Wolverines showed they can pass when they need to against Michigan State with the program’s first 400-yard passing game since 2015.

Next: at North Carolina, Saturday.

Reality check: Tempting to wonder how good the Demon Deacons’ offense would be with Kenneth Walker, who transferred to Michigan State in the offseason. The three-man rotation of Christian Beal-Smith, Justice Ellison and Christian Turner has been solid with 1,149 yards rushing, 4.85 yards per carry and 14 TDs.

Reality check: The Cowboys are a running team that averages 3.94 yards per carry —- and that’s with a boost after playing Kansas. Will that be a problem before Bedlam?

Reality check: The Tigers are elite in two areas: They don’t get thrown off schedule with negative plays (29 allowed, second fewest in the SEC) and they are second in the SEC in tackles for loss with 7.88 per game.

Reality check: The second-best defense in the SEC behind Georgia belongs to the Aggies. Led by DT DeMarvin Leal, A&M is allowing 4.76 yards per play.

Next: at TCU, Saturday.

Next: vs. Liberty, Saturday.

Reality check: Rebels lead the country in fourth-down conversion attempts at 34, no surprise there. They are converting at 70.59%, 18th best in the country. Keep it up, Coach Kiffin.

Next: at UTEP, Saturday.

Reality check: You are not running on the Roadrunners. Only two opponents have cracked 2.50 yards per carry in a game.

Next: vs. Idaho State, Saturday.

Next: vs Tennessee, Saturday.

Reality check: There was a lot of excitement about QB Will Levis early in the season, but he now leads the SEC in interceptions (nine) and in four of the last five games has been held under 5.5 yards per pass.

Ranked: Seems too high but not a lot of obviously good options behind the Wildcats.

Reality check: A two-game losing streak has buried the Hawkeyes’ playoff dreams, and if they can’t figure out a way to do better than 6.3 yards per pass and 57% completion rate they’re going to have a difficult time just staying ranked.

Reality check: Cornerback Marcus Jones has four return touchdowns this season, including a 100-yard run back on a kickoff in the final minute that beat SMU, and nine in his college career.

Reality check: Chants can be susceptible to the run. Next two opponents (Georgia Southern and Georgia State) rank in the top four of the Sun Belt in yards per rush.

Reality check: Nittany Lions have no chance to win the Big Ten East after three straight losses, but with a healthy QB Sean Clifford they could still play spoiler to contenders Michigan and Michigan State.

Reality check: Mustangs are allowing 8.6 yards per pass, which puts them in some unpleasant company at 115th in the nation, behind Georgia Tech, tied with Tulane and just ahead of UNLV.

Next: vs. Georgia State, Thursday.

Reality check: Ragin’ Cajuns have ripped off seven straight victories since losing their opener to Texas.

Next: vs. Boise State, Saturday.

Reality check: Bulldogs losses are to Oregon and at Hawaii in a game QB Jake Haener left with an injury. After Cincinnati, this is probably the second-best G5 team.

Voters gave up on Pittsburgh too quickly this week after its second close loss of the season.