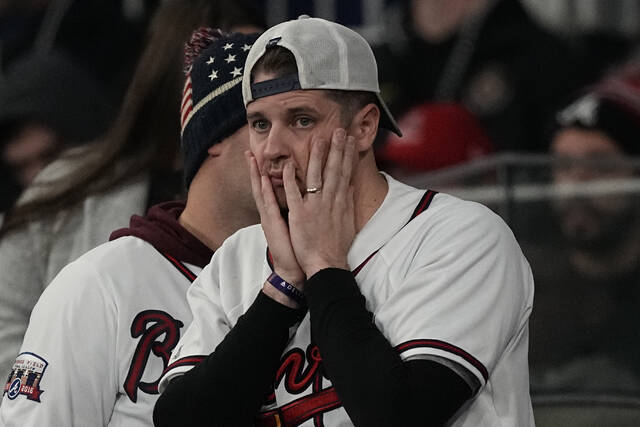 HOUSTON (AP) — Late innings means late nights in the World Series, with many fans struggling to stay awake as the Braves and Astros play baseball’s most important games of the year.

The first five Series games averaged 3 hours, 41 minutes, up from 3:37 for the Los Angeles Dodgers’ six-game win over Tampa Bay last year. The opener took 4:06 and Game 5 lasted exactly 4 hours, both ending after midnight on the East Coast.

This year’s overall postseason average of 3:38 is an increase from 3:32 last year.

Sooner or later, Major League Baseball will institute a pitch clock — with or without an agreement with the players’ association.

“I want to be really clear about this,” Commissioner Rob Manfred said before the Series opener. “We have rights under the agreement to do certain things with a certain process that’s been followed. There’s going to come a point in time where the pressure to make change is going to be sufficient. I prefer to do it by reaching an agreement with the players.”

MLB has the right to unilaterally change on-field rules with one year of advance notice to the union. During the 2016-17 offseason, MLB proposed a 20-second timer in many situations, with a second violation resulting in the umpire calling a ball.

As part of a March 2019 agreement that increased active rosters from 25 to 26 players and mandated a pitcher face three batters or finish an inning, MLB agreed not to implement a pitch clock through 2021.

Players have been reluctant to consider a clock. Union head Tony Clark, a former All-Star first baseman, didn’t give a direct answer when asked whether he wanted to see a crisper product on the field.

“I’m a former player. I owe everything to the game. So do I watch it? Do I critique it? Do I analyze it? Am I willing to have a conversation about its well-being?” he said. “Always have and will continue to. That’s not going to change. And I’m sure that at the end of the World Series, the dialogue that we’ve had to this point will continue.”

Asked what he thought of MLB’s experiments at minor league levels, he responded: “The experience in some instances has been less than favorable.”

A pitch clock would eliminate much of the dead time caused when hitters step out of the batter’s box and pitchers back off the mound and take deep breaths on the infield grass.

MLB experimented with a 20-second pitch clock during spring training in 2019, with a cutout on the first pitch of every plate appearance.

“I absolutely am in favor of it,” broadcaster Bob Costas said. “For obvious reasons, it gets trickier with men on base.”

Minor league Triple-A and Double-A games have had a 20-second pitch clock since 2015.

“It’s not that hard,” said Houston outfielder Kyle Tucker, who first reached the majors in 2018 and spent time at Triple-A in 2019. “You just, I don’t know, speed it up a little bit, I guess.”

A test was held this season at minor league Low-A West, setting the clock at 15 seconds with the bases empty, 17 seconds with runners on, 30 seconds between batters and 2:15 for half-inning breaks and pitching changes.

“Certainly encouraging,” Manfred said. “Game times in the 2:40s, which is a really sort of nice number when you think about it in comparison to where we’ve been. I think maybe more important than that is that people that go and watch the games feel like the pace of the game, the action in the game has really been improved, that it actually alters the requirement of moving along pitching, kind of changes the game the way it’s played a little bit. And that would be a useful change for us.”

Braves manager Brian Snitker didn’t mind the Triple-A clock but isn’t in favor of some possible restrictions. He and Astros manager Dusty Baker both think the primary cause of lengthy postseason games is time between innings. The break has been set at 2 minutes, 55 seconds for at least 20 years, with 2:25 for extra innings and pitching changes. That is up from 2:05 inning breaks during the regular season, except for 2:25 during nationally broadcast games.