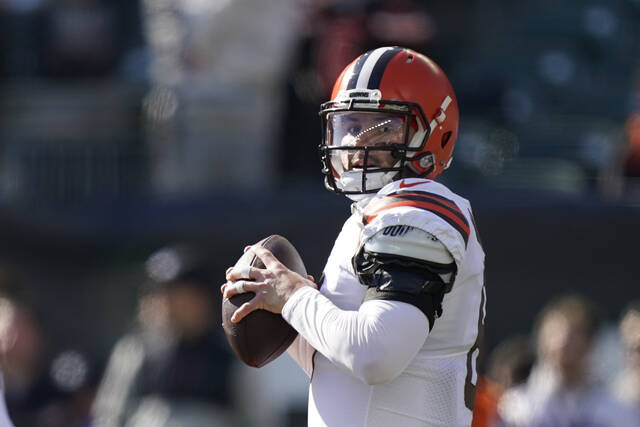 CLEVELAND (AP) — As the sun dipped below Paul Brown Stadium’s overhang after the Browns salvaged their season, Baker Mayfield jogged off the field and tipped his cap toward Cleveland fans partying in the lower bowl.

Once again, Cincinnati — and chaos — brought out his best.

And just like last season, the Browns awakened along the Ohio River.

At the end of a long, drama-filled week that felt like a month, Mayfield led with words and actions and the Browns played their most complete game, a 41-16 thrashing Sunday of the Bengals that could prove cathartic for Cleveland.

Just one win, but so much bigger.

This season of Super Bowl expectations — perhaps premature — was in jeopardy of dissolving into disappointment amid social media postings, rumors and Mayfield’s worrisome shoulder injury.

However, last week’s Odell Beckham soap opera was merely a speed bump as Mayfield and the Browns (5-4) blocked out the external noise and took out any pent-up frustration on Bengals quarterback Joe Burrow and rookie receiver Ja’Marr Chase.

The same thing happened on the same field a year ago, when Beckham suffered a season-ending knee injury, Mayfield played more like he did as a free-wheeling rookie and the Browns took off toward their first postseason in nearly 20 years.

For whatever reason, Mayfield thrives amid the mayhem.

Tell him he can’t, and he does. Doubt his skills, and he delivers.

“That’s Baker for you,” said running back Nick Chubb, who had 137 yards and two touchdowns Sunday. “He’s not going to shy away from anything. He’s not going to be held back. He loves when people are doubting him, that’s what he feeds off of.”

As Mayfield goes, so go the Browns, who like their QB are better off without OBJ.

Before Sunday’s game, Mayfield delivered a fiery on-field speech to his teammates and then went out and played a clean game, throwing two touchdown passes and going 14 of 21 while wearing a stabilizing harness on his injured left shoulder.

The device hinders him some. Maybe not as much as Beckham’s presence.

Their relationship was tricky, and although they were friends off the field, Mayfield and Beckham never found that closeness playing together. Mayfield’s statistics last season were alarmingly lopsided with Beckham (10 touchdowns, 7 interceptions) than without him (16 TDs, 1 INT).

Now that Beckham’s gone, Mayfield can spread the ball to all his receivers than worrying about making one happy.

A unit that was overhauled in the offseason by free-agent signings and has taken time to develop chemistry due to injuries and inconsistency, may finally be gelling at just the right time.

Penalties are a major problem. Against the Bengals, the Browns were called for 10, including two on end Jadeveon Clowney for lining up in the neutral zone. Cleveland leads the NFL with 602 penalty yards.

“We are very close to being worst in the league, and that is an undisciplined team,” coach Kevin Stefanski said. “That is what losing looks like.”

Coming off a 61-yard performance, Chubb ran all over the Bengals. Whether showing his jaw-dropping breakaway speed on a 70-yard, game-sealing TD in the third quarter or fighting for tough yards inside, Chubb was nearly unstoppable.

With Tennessee’s Derrick Henry done for the season, this could be the year Chubb wins the NFL rushing crown.

Defensive tackle Jordan Elliott was called for two penalties Sunday, one for roughness after he was singled out in a skirmish involving several players.

Elliott, who was also called for face-masking, was lucky he didn’t get flagged last week for a questionable hit that concussed Steelers kicker Chris Boswell.

Mayfield’s left shoulder (torn labrum, fracture) will be a constant point of concern. He’s got to avoid taking a big hit or risk having it pop out again. … Playmaking RB Kareem Hunt (calf) is eligible to return from injured reserve this week. … Rookie LB Jeremiah Owusu-Koramoah (ankle) could also be back after missing three games. The Browns have missed his speed. … RT Jack Conklin (elbow) went on IR over the weekend, but it’s possible he’ll be out beyond the three-game minimum. … CB Greedy Williams (shoulder) is day to day.

16 — Cleveland leads the league with rushing touchdowns, and the Browns are tied for the lead with 36 since the beginning of last season.

Coming off a loss, this Sunday’s trip to New England and another matchup with former Browns coach Bill Belichick would have had a very different vibe. It’s still a tough matchup for Cleveland, but doesn’t feel ominous.