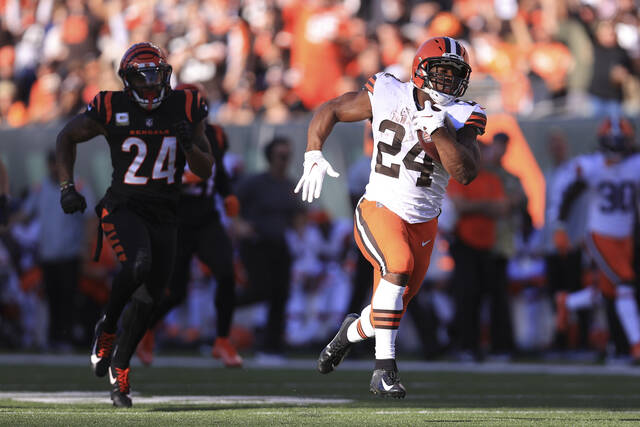 CLEVELAND (AP) — Browns running back Nick Chubb is being placed on the COVID-19 list after testing positive and could miss this week’s game at New England, a person familiar with the situation told The Associated Press on Tuesday.

One of the NFL’s best backs, Chubb is going on the list along with rookie running back Demetric Felton, according to the person who spoke to the AP on condition of anonymity because the team has not made the transaction official.

It’s still possible Chubb, who is vaccinated, could play against the Patriots this week as long as he tests negative twice. ESPN first reported Chubb’s status.

The Browns had major issues with the coronavirus last season. Coach Kevin Stefanski had to miss Cleveland’s first playoff game since 2003 when he tested positive a few days before the wild-card matchup at Pittsburgh.

The team has avoided similar widespread problems this season but has had four positive tests in the last two days. Running John Kelly and practice squad wide receiver Lawrence Cager were put on the COVID-19 list Monday.

Chubb rushed for 137 yards and scored two touchdowns in Sunday’s 41-16 at Cincinnati. One of the scores was a 70-yard run on which he was clocked at 21.1 mph.

The 25-year-old Chubb has 721 yards and six touchdowns this season. He missed two games with a calf injury.