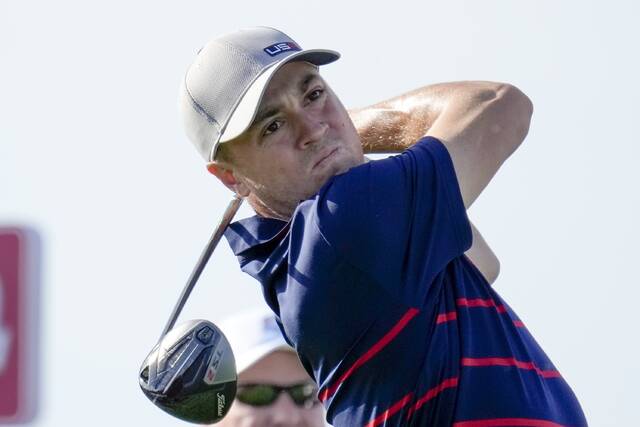 Tiger Woods holds a number of PGA Tour records that aren’t likely to be broken, from 142 consecutive cuts to holding all four majors at the same time to shooting 53 consecutive rounds at par or better.

That one probably won’t last, even if it’s not under immediate danger. Dustin Johnson is a little more than $48 million away and Rory McIlroy is not quite halfway there.

Some of it is inflation, sure. A big part, however, is the PGA Tour finally putting more urgency on compensating its top players.

As long as they still have to earn it, that’s a smart move.

The objective for golfers to be paid like athletes in other sports has been around since Woods arrived, interest spiked and television contracts soared. The topic is stronger than ever now with the very real threat of rival leagues promising instant riches.

Golf has a long history of rewarding its stars more for what they do than what they have done. Then again, the PGA Tour has never had to contend with Saudi Arabia’s oil-rich sovereign wealth fund.

The PGA Tour took its first step with the secretive “Player Impact Program” that offered $40 million this year to the leading 10 players who are deemed to have moved the needle, a list the tour said it will not make public. That figure is expected to increase, either in the money or number of players who cash in, probably both.

But the notion of guaranteed money — the likely appeal for whatever Greg Norman and his Saudi-backed LIV Golf Investments have in mind — is a dangerous path.

Golf doesn’t pay players like team sports because it isn’t one.

The tour’s policy board met Monday in Houston to approve prize money and other forms of compensation for the season. The verdict is expected later this week, though official prize money could be even more than the $35 million boost Commissioner Jay Monahan projected at the Tour Championship.

He also has said “comprehensive earnings” were expected to be just over $630 million.

The question is whether that’s enough.

At least two players have coined a similar phrase of $50 million “magically appearing” to pay for the Player Impact Program and another program called “Play 15” that doles out $50,000 to anyone playing 15 tournaments.

The tour would suggest nothing magical about it. In a presentation to the Player Advisory Council, it showed players competing for 55% of consolidated revenue from roughly $1.5 billion, courtesy of a nine-year media rights deal worth about $7 billion. It also includes $32 million from the reserve fund to help pay for the earnings increase.

For now, the tour is moving forward by creating big purses for the biggest events, because that’s where the best players are.

Justin Thomas was asked last week if golf’s best were not properly compensated.

“Maybe in the past,” he said. “But I think with stuff like the Player Impact Program and purses and everything going up, I think it’s becoming that way.”

What took so long?

The short answer is a threat of a new product, which has been around for seven years and now has a face (Norman) and the funds (Saudi Arabia) to make it real.

“I think all of this that’s kind of happened outside of the PGA Tour has created a lot of questions from the players to where the tour’s done a great job of answering it, but also answering that maybe we have the opportunity to better our product,” Thomas said.

To look forward requires a peek behind. It was late in 2000, right after Manny Ramirez stunned the baseball world by signing an eight-year, $160 million deal with the Boston Red Sox, that then-Commissioner Tim Finchem was asked about PGA Tour player earnings falling in line with other sports.

The total purse was $163.5 million that year, double what it was four years earlier during Woods’ first full season.

“We still have an awful long way to go,” Finchem said that day.

But he mentioned the retirement plan, a lucrative system based on cuts made, earnings from three segments of the season and total earnings for the year, that should not be dismissed. Finchem also mentioned the ability of top players to sign their own corporate deals (“We don’t have official uniforms,” he said).

The business site Sportico recently listed the 10 richest athletes adjusted for inflation. Michael Jordan led the way. He was followed by Woods, Arnold Palmer and Jack Nicklaus. Not surprisingly, six of the top 10 came from individual sports.

Inside the ropes, golf should never lose sight of performance.

Along with more prize money and bonus pools, the tour is contemplating a fall “global series” with big purses, no cut and appearance money for the top finishers in the FedEx Cup. Another consideration is to make purses top heavy at the elite events that attract the best players.

The idea is to compensate the stars, and to still make them earn it.