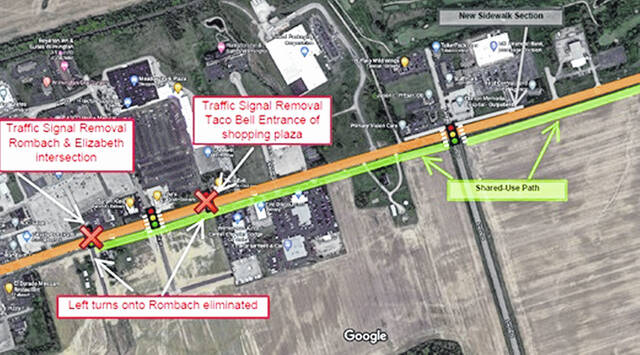 WILMINGTON – The City of Wilmington advises motorists of a removal of two traffic signals on Rombach Avenue this Friday, Nov. 12.

The two traffic signals slated for removal are at the intersection of Rombach Avenue and Elizabeth Lane, and the entrance to the shopping plaza at Taco Bell.

After the signals are removed, left turns will no longer be permitted onto Rombach at these intersections. No other signals will be affected.

The signal removal will occur during the traffic pattern change already scheduled for Friday; the city announced earlier this week that motorists could encounter very long delays this Friday.

In the event of inclement weather, these changes will likely occur on Sunday, Nov. 14.

The Rombach Avenue project will be mostly dormant from Nov. 12 through the beginning of March. The original five-lane traffic pattern from prior to construction will be restored during this time, although there will still be various lane closures to accommodate some winter improvement work.

The Rombach Avenue Improvements Project is funded through a combination of federal, state, and local funds. The project is funded using a federal safety grant through the Ohio Department of Transportation’s Highway Safety Improvement Program, pavement resurfacing funding via the Ohio Department of Transportation’s Urban Paving Program, both a grant and a zero-percent infrastructure loan funded through Round 34 of the Ohio Public Works Commission, and local dollars.

The City of Wilmington asks all motorists to continue being patient, reduce speed, and exercise added caution when traveling near this work zone.

Information regarding this and other city projects can be found on the City of Wilmington website at https://wilmingtonoh.org/municipal-services/city-projects/ .

Questions regarding the Rombach Avenue Improvements Project may be directed to the Ohio Department of Transportation, District 8, at 513-933-6758 or to the Director of Public Service at 937-382-6509.