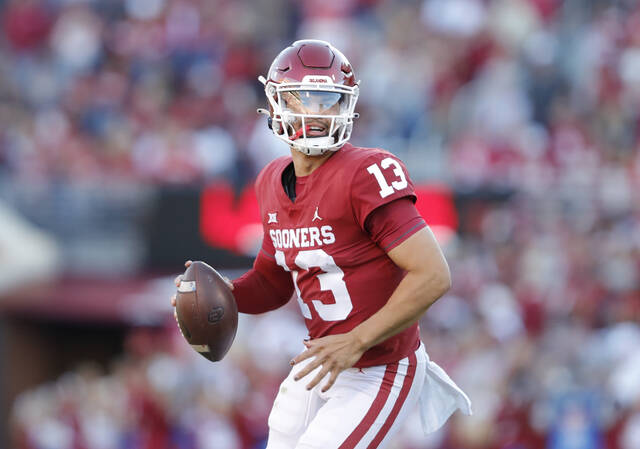 In the Big 12, No. 4 Oklahoma (CFP No. 8) faces No. 18 Baylor (CFP No. 13) in the first game of a difficult stretch run for the unbeaten Sooners. The Bears are coming off a loss to TCU and one more setback could put their chances of reaching the conference title game in serious danger.

No. 9 Michigan (CFP No. 6) is on the road at No. 23 Penn State. The Wolverines have lost their last two trips to Happy Valley. The Nittany Lions are out of the three-team Big Ten East (Michigan, Michigan State and Ohio State) race, but can still play spoiler.

No. 21 North Carolina State (CFP No. 16) is at No. 13 Wake Forest (CFP No. 12) with first place in the Atlantic Coast Conference’s Atlantic Division on the line. The winner would be really tough to catch.

Lots of good ones from which to choose, but Sooners-Bears has the best combination of high stakes and entertainment value.

The Big 12’s two best offenses square off against a couple of defenses that have shown some recent vulnerabilities.

Sooners quarterback Caleb Williams has 14 touchdown passes since taking over as OU’s QB1 at halftime of the Texas game.

Baylor has maybe the best running back in the country you probably have not heard of in Abram Smith (1,055 yards and 7.33 per carry).

Corral was getting a lot of Heisman Trophy buzz in the first half of the season, but that has tapered off as the Rebels have lost a second game.

If he’s going to have any shot to crank it up again, now is the time and Texas A&M is a good opponent to do it against.

The Aggies have the best defense in the SEC outside of Athens, Georgia.

6 — Touchdowns allowed by No. 1 Georgia. The Bulldogs face Tennessee, which scored six touchdowns last week against Kentucky, despite having the ball for only 13-plus minutes.

9 — Touchdowns scored in the last four games by Oregon running back Travis Dye, who has become the focal point of the fourth-ranked Ducks’ running game since CJ Verdell was injured. Oregon faces Washington State, the Ducks’ closest pursuer in the Pac-12 North.

22 — Number of receptions for 457 yards by Purdue receiver David Bell in the Boilermakers’ two victories against top-five teams. Purdue will go for its third victory as an unranked team against a top-10 opponent at Ohio State. Only Illinois in 1959 has done that.

37 — Points allowed by No. 20 Wisconsin during a five-game winning streak. The Badgers host Northwestern.

1992 —- The only season Wake Forest and North Carolina State played when both were ranked in 113 meetings.

The Bruins haven’t had the breakout season that seemed to be in the works after they beat LSU. Two straight losses have UCLA at 5-4, but the closing stretch of the season is manageable, starting with Colorado.

Beat the Buffaloes, and UCLA clinches bowl eligibility for the first time in four seasons under coach Chip Kelly. Not exactly what the Bruins signed up for when they hired the former Oregon coach, but it’s a step forward.

The Cardinals’ coach had a rocky end to last season when he looked into the South Carolina job opening as he was finishing up a 4-7 season.

His third season in Louisville has included several close games that have left the Cardinals (4-5) two wins shy of bowl eligibility with three to play.

Syracuse comes to Louisville on Saturday as the school retires Heisman winner Lamar Jackson’s No. 8 jersey. It’s a critical game to get the Cardinals to bowl eligibility, and losing on the night the school honors its biggest star is no way for a coach to get in the good graces of fans.