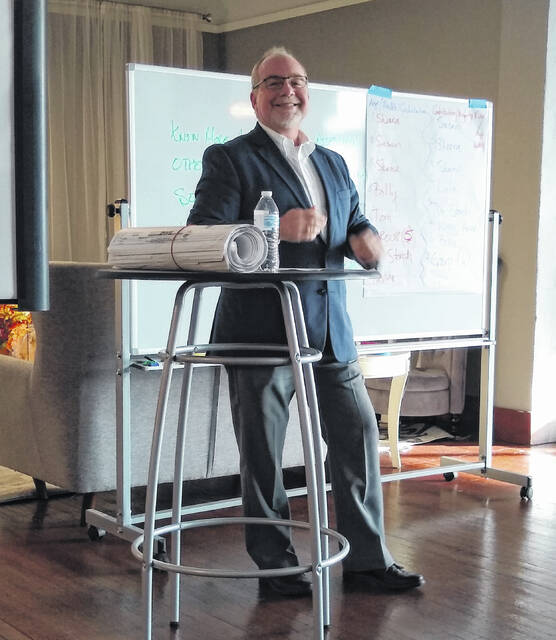 WILMINGTON — The 34th class of Leadership Clinton met Thursday, Nov. 18 at The Loft on Main with the day’s theme “Modeling the Way.”

Lisa Nack of the Nack Reuther Group joined the class for a second time to lead them through an exercise to identify their personal values and then how to use those strengths to be a good leader.

In her words, leadership is all about relationships. She had the class try to list the most wealthy people in the world; Nobel Peace Prize winners; Best Picture, Actor/Actress winners; and Time Magazine People of the Year.

While the class struggled with that, they could easily identify the teachers/coaches who supported them through school, the friends who have helped them get through hard times, those who taught them something, and those who made them feel special or appreciated thus illustrating her point about leadership.

The class then did an activity individually and then split into two groups which showed that as a class, they collectively value peoples’ contributions to the greater good of society.

A picnic-style lunch was provided by McCoy’s Catering and donated by the Clinton County Convention and Visitors Bureau. CVB Executive Director Susan Valentine-Scott and Executive Assistant Melissa Hedrick joined the class and explained the role of the CVB, as well as how to reserve The Loft on Main.

Thank you, Susan and Melissa, for your generosity and use of your space!

Ed Lacy, a Wilmington City Schools graduate, Vietnam veteran, and retired drug/homeless/alcohol rehab director from California, spoke to the class about the consciousness of self.

He began by having Tammy Reed from Main Street Yoga Center treat the class to a centering experience. He then read his intention for the day that simplified to sharing your gifts and talents with others so that they could then pass those along to the next person.

Along the same lines, he told the class that now that they have more knowledge of themselves, they need to do something about it or with it. He implored the class to be a change magnet and reminded them that when you fall down, get up and get grateful! He left the class with a parting gift — a rubber band to remind them to be in the moment.

The next speaker was Dan Evers, Executive Director of the Clinton County Port Authority. He asked each member of the class what they think of when they think of technology. Most commented on the evolution of technology in such a short amount of time.

He then introduced some of the technology at the Wilmington Air Park to prepare for the future economic development session. The airport has an instrument landing system for airplanes that are also equipped with that system and pilots who are trained on it to land an airplane in any weather.

Evers gave the class examples of the artificial intelligence used at the Amazon facility. He also described a company at the air park that is developing a touchscreen control system for airplanes.

The Port Authority is teaming with the Clinton County Commissioners to expand broadband access to those throughout Clinton County.

He noted that the Wilmington Airport is the largest airport in the United States that does not receive any federal funding. They are a self-sustaining airport through leasing real estate, other aviation-related fees, and about $6 million worth in grants over the past five years that has all been put back into infrastructure.

His advice to the students was to give stakeholders a chance to try out new technology before it is fully implemented.

The classmates then discussed their class project for this year. While there are a few ideas, they all focus on helping those in need through collecting supplies or organizing volunteers. By the next session on Jan. 20, the class will have their project chosen and begin to put it in motion.

To close out the day, Dan Buckley, a Clinton County native and nationally renowned lawyer, motivated the class to surround themselves with great people, know themselves and their own strengths and weaknesses, and communicate persuasively to lead effectively.

His tips for communicating persuasively include: credibility is everything, be prepared, be brief (10-15 minutes), and use facts. He suggested to the students to have a theme when presenting and focus on primacy (the beginning) and recency (the end) since it’s been proven scientifically that that’s what people will remember.

It’s also best to know your audience and make them feel safe and that they are doing the right thing.

He reminded the class to be themselves and not to use any disparaging language. He closed by saying what passes for talent and brilliance is really sweat.

The 34th Leadership Clinton class extends their appreciation to all those who took time out of their day to speak to them and truly model the way!