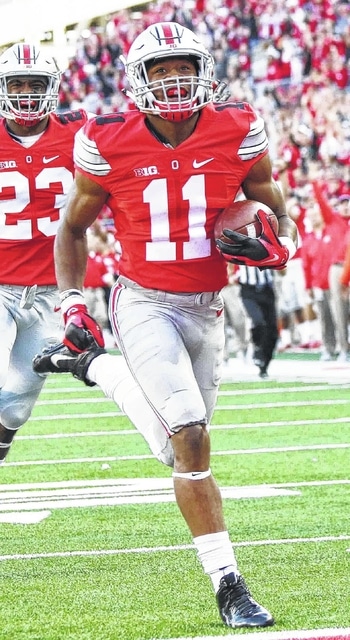 And not the possibly nervous smile an earlier question about who should start at quarterback drew.

The question was about whether OSU’s defensive backfield reminds him of guys like Shawn Springs, Antoine Winfield and Ahmed Plummer he played with in the mid-1990s when he was a defensive lineman for the Buckeyes.

Fickell wouldn’t compare this year’s players with the 1990s defensive backs, but said safeties Vonn Bell and Tyvis Powell and cornerbacks Eli Apple and Gareon Conley “have a chance to be remembered for a long time at Ohio State” if they continue to improve.

Ohio State is fourth nationally in pass defense after giving up fewer than 100 yards in the air in its last two games against Northern Illinois and Hawaii.

Just two years ago, the Buckeyes were 11th in the Big Ten in pass defense and gave up a league-high 31 touchdowns in the air. Five times it allowed more than 300 yards passing in a game.

None of this year’s starters were in the lineup two years ago. Powell, Bell and Conley were back-ups and Apple was redshirted.

“We’re playing at a high level right now,” Bell said. “We’re not giving up anything deep and we’re making plays down the field.”

“We’ve got one of the best defensive lines in the country. Anytime you’ve got Joey Bosa and Sam Hubbard rushing the passer I have great confidence they’re going to get pressure on him,” he said.

“Any time you get a team in a passing situation and you let our front four just eat and rush the passer you can kind of feel the quarterback wanting to throw a little faster.

“We can be a little more aggressive because we know the ball is going to come out fast,” he said.

Co-defensive coordinator and safeties coach Chris Ash said, “I think it starts with the players that we have. They’re talented players. They’re playing extremely hard. They’re playing with a lot of confidence. They believe in themselves, believe in what we ask them to do.

“And we want to play physical. You can see in our tackling we’re a pretty physical tackling defense, not just a secondary, but a defense. If we can do those three things consistently each week, we’re going to have a chance for success,” Ash said.