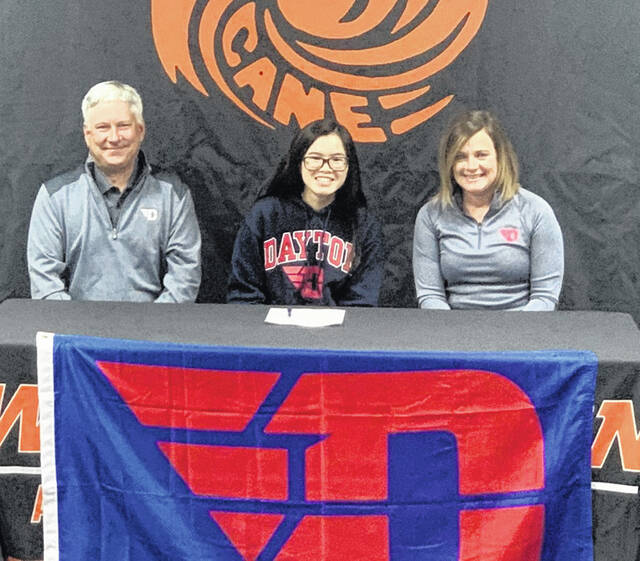 Not long ago, Wilmington High School senior Lilly Middleton wasn’t certain if she wanted to play golf in college.

Now, she’s headed to the University of Dayton to play golf for the Flyers.

“When I visited Dayton’s campus, I thought it was pretty and I liked how the buildings were close together,” said Middleton, who finished her WHS golf career by finishing 11th in the OHSAA Division I Girls Golf Championship at Ohio State University on October 23. “Their athletic and academic facilities were very nice and I enjoyed talking to coach (Ali) Green and some current members of the team during the visit. I think coach Green is very determined and cares about building the program at UD.”

Middleton was a two-time SBAAC Golfer of the Year and a four-time SBAAC first-team selection.

“Lilly was a great player to coach and even better person,” WHS girls golf coach Pat Black said. “It was a great pleasure to coach her and to see the player that she has become. We are excited for her future at Dayton.”

The University of Dayton is a member of the Atlantic 10 Conference. The A-10 does not, however, recognize women’s golf as a championship sport.

According to the UD women’s golf website, UD will play in the Metro Atlantic Athletic Conference Women’s Golf Championship tournament next spring.

Middleton said she had been in contact with Dayton several months before the state tournament then Green spoke with her following the final round in Columbus. It was then Middleton set up a visit to the UD camps.

“Less than a month ago, I still wasn’t sure if I even wanted to play golf in college,” said Middleton. “I was basically deciding between the University of Cincinnati without golf, Dayton with the possibility of golf and maybe a D3 school, definitely for golf.”

Once she visited Dayton and was offered an opportunity to play golf there, Middleton decided it was the place for her.

“I recently found out two other girls who also committed to Dayton and I already know a couple girls on the team now, so I’m excited to play with them,” she said. “It’s also nice to already know where I’m going to college and not have to worry about it anymore.